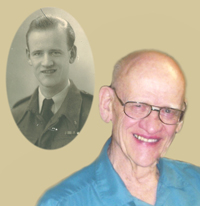 With great sadness we announce the passing of Mr. Arthur Donald (Don) White at the age of 91 years.

He leaves to mourn his beloved wife of 67 years, Mrs. Rose Eveline White, his daughter, Marla (Michael) Largary of Brooks, and his sons, Al (Marianna), and Bradley (Rachelle) of Lethbridge. Also, he leaves 10 grandchildren, and 2 great grandchildren who all loved him dearly, and his beloved sister, Mrs. Kathleen (Kay) Cummins on her farm near Torrington, AB.

He lived a very active life up to his passing, and was a lifelong boy scout taking in many jamborees worldwide. He served his country in World War II as an aircraft instrument technician with the RCAF, served as a reserve army officer for 24 years with Southern Alberta Regiment (SAR) in Medicine Hat, Royal Canadian Electrical and Mechanical Engineers (RCEME), Royal Canadian Engineers (RCE), and Royal Canadian Artillery (RCA), all units that existed in Lethbridge over the years.

He was transferred to Lethbridge in 1950 with his wife Rose as Chief Engineer of the Crystal Dairy downtown until 1972 when he left the milk business to work for Gilbeys at Palliser Distillers as a Power Engineer and mechanic until his retirement in 1992. He also spent 25 years at the Lethbridge College teaching 4th class Power engineering two nights a week. He helped many students receive their 4th class Power Engineering ticket to further their careers in their fields of employment.

He was an active member with the Army, Navy, Air Force Veterans club (ANAF) of Lethbridge for over 50 years, active with the Boy Scouts of Canada most of his life, along with the Navy League of Canada.

Dad did it all… Air, ground and sea. All bases covered.

He also was a member of the Lethbridge United Services Institute (LUSI) since its inception, and enjoyed the many friendships he had with its members over the years.

His real passion was to travel the world, which he did very well over his many trips abroad. With his last trip conquering the Great Wall of China at the age of 80, and being invited by the Government of Canada to celebrate the 90th anniversary of Vimy Ridge with the Queen of England’s presence in Northern France in 2006, along with his son, Al accompanying him there. Dad’s father was also a World War I veteran as a mounted machine gunner, but was not involved at Vimy Ridge.

He enjoyed many hours in retirement at the Lethbridge Seniors Club playing carpet bowling with his many friends and serving on the board for some years as well.

He was predeceased by his parents, Arthur Tom White and Elsie Violet White

(Peckham) of Medicine Hat, and his eldest beloved son, Earl Curtis White and his lovely wife Valerie (Oakes) of Edmonton.

He always believed in helping his fellow man, and to always do his best whatever the task was before him.

He will be remembered.

Farewell Dad, grandpa, great grandpa and “Don” as everyone knew him by.