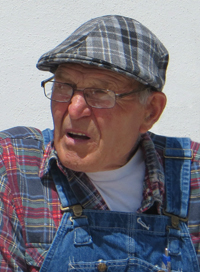 Harvey Glen Schnee, beloved husband of Natasha Schnee of Medicine Hat, passed away on Tuesday, June 30th, 2015 at the age of 80 years. Harvey also leaves to cherish his memory his step-daughter, Magdalena (Terry) Hartman; two grandchildren, Clinton (Amanda) Hartman and Christopher Hartman; two great- grandchildren, Abel and Jacob; three brothers, Henry, Merle (Mary), and Harold (Erma); three sisters, Marion Wooden, Theda Lloyd, and Alice Larson; as well as numerous nieces and nephews. Harvey was predeceased by his parents, Henry and Lela Schnee; and one brother, Neil. Harvey was born in Medicine Hat on May 18th, 1935 and grew up on a farm in the Granlea District. He attended Glen Echo School until Grade 4 and then moved to Conquerville School. Harvey started farming at the age of 10 and farmed until 1968 when he went to Europe. While there he got work on an offshore oil rig. He worked for several offshore companies working his way up to field superintendant. He came back to Canada in 1986, and worked for oil related companies until 2005. Harvey spent most of his time in his shop improving on everything he ever bought. He had an innovative mind that every engineer would envy. Harvey was a member of every Co-op in the area as well as the Heritage Acres Club. He loved the antique tractor club and built a sled for antique tractor pulls. Harvey was also a member of the Board of Alberta Federation of Alberta Water Club. He will be deeply missed and lovingly remembered by all those who knew and loved him. The Memorial Service will be held at Glen Echo School on Tuesday, July 7th, 2015 at 2:00 p.m. To get to the school, take Highway 884 south to Township Road 84, turn west and go to the first intersection, turn right and go one-half mile north. Memorial gifts in Harvey’s memory may be made to Salvation Army, 164 Stratton Way SE, Medicine Hat, Alberta, T1B 3R3. Condolences may be sent through www.saamis.com or to condolences@saamis.com subject heading Harvey Schnee. Funeral arrangements are entrusted to