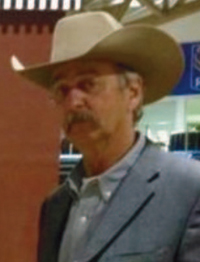 Our hearts are saddened at the loss of our father, grandfather, brother, partner and friend. ” Papa Don” Kraft passed away peacefully with his family at his side Monday, June 29, 2015 at the age of 60. Don was born June 4, 1955 in Eston, Saskatchewan to Melvin and Flora Kraft (Steadward). He was the youngest of four children. Don was all cowboy through and through. He was raised on a ranch in Eston and learned to ride young. He instilled in himself and eventually in his children and grandchildren a love for the rodeo way of life. Don was actively involved in the high school rodeo association from the time his boys were young and he was a great supporter of it. He enjoyed a long roping career, competing in various events, sometimes with his boys as roping partners. In the last few years he competed at the senior rodeo circuit in team roping and also competed in the ribbon roping with his girlfriend Marilyn. His love for rodeo never wavered and he has groomed and helped many contestants along the way. He spent many seasons hunting with friends, family and with his son, Justin. Don worked for more than 30 years for the PFRA community pasture program, starting in Davidson, Saskatchewan in 1978 before moving on to Tuffnell, Saskatchewan in 1985 and then transferring to Medicine Hat and the Suffield pasture in 1987. Don retired from the PFRA in the fall of 2014. Don was a devoted loving partner to Marilyn Callaway and loved by all who knew him. His three sons were his pride and joy. He is survived by Justin (Janet) and their children Mason and Levi: Dalton (Linda) and their children Addison and Tytan: and Tyler (Vanessa) and their children Lathom and baby Kraft due soon; as well as by the boys’ mother, Susan, and his brother Roy Kraft (Heather) and sisters Marion King (Lawrence) and Brenda Elliot (Wayne) He also leaves to cherish his love Marilyn and her daughters Bailey Callaway (Brendan) and children Jhett and Jaxon; Cassie Gowing (Joel) and their child Wilder and Paige Callaway. He will be missed as well by Marilyn’s brother Wayne Fullerton (Teri). Don was predeceased by his mother Flora and father Melvin. Don will be missed by numerous nieces, nephews, cousins and friends, including special lifelong friend Blythe Stevenson. Don loved being with his cherished grandchildren, teaching them roping skills and spoiling them with fun fruits. Don was not only proud of his family but of his rodeo livestock and took great care of his animals. He will be missed by his horse Badger and dog companion Til. His honesty, wisdom and unwavering integrity will be remembered by all. “Welcome to heaven cowboy, your entry fees are paid” A celebration of his life will be held on July 17, 2015 at 1pm at Holy Family Parish: 1451 Strachan Rd SE Medicine Hat Alberta. In lieu of flowers, a donation can be made in his name to Foothills Country Hospice. Social to follow.