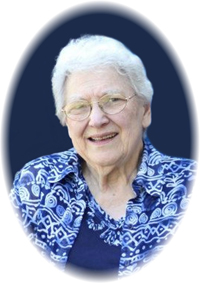 Ramona Lillian Koch of Brooks, wife of the late Rudolph (Rusty) Koch, passed away in Brooks on Monday, June 29th, 2015 at the age of 85 years. Ramona was born on November 20th, 1929 in Medicine Hat to Gottlieb and Katherina Zieffle. She received her early education in Schuler, Alberta, then in her early teens, attended a Catholic School in Medicine Hat. Ramona married Rudolph Koch on December 7th, 1951 in Medicine Hat. She worked as a bank teller, as well working on the farm and raising her family. Ramona enjoyed sewing, crafts and loved to read. She will be remembered for her sense of humor and her deep love for her family and friends. Ramona was predeceased by her husband Rudolph (Rusty) Koch, parents Gottlieb and Katherina Zieffle and brother Roger Zieffle. She is survived by her children, Harold Koch of Glendon, Alberta, Kathy (Darrell) Smith of Brooks, Marilyn (Rockley) Fardoe of Medicine Hat, and Richard (Pat) Koch of Cold Lake, Alberta; grandchildren, Brandy (Shawn) Gleisner of Brooks, Darcy (Stephanie) Smith of Brooks, Jody Smith of Calgary, Sean (Janet) and Dawn (Mark); great grandchildren, Breanne, Aiden and Ava Gleisner, Hunter, Zander and Maylin Smith all of Brooks and Kody, Danielle, Alyssa and Ryan, brother Gordon (Sandra) Zieffle of Calgary, sister Lorraine (Edmund) Mauch of Medicine Hat and numerous nieces and nephews. Funeral services will be held on Saturday, July 11th at 10:30 AM from Trinity Lutheran Church. Rev. John Theiss officiating. In memory of Ramona, if friends desire, memorial tributes may be made to the Brooks and District Health Foundation, Bag 300, Brooks, Alberta T1R 1B3. Funeral arrangements in care of SMITH FUNERAL HOME AND CREMATORIUM, BROOKS, ALBERTA. Condolences may be forwarded through www.sfh.ca Telephone 403-362-4636 or Toll Free (866) 362-4652.