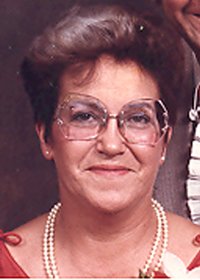 Heaven became a better place on Monday, July 6, 2015 when Mary Florence Ritz, née Hart was called home. Mary was born August 17, 1941 in Swan River, Manitoba to William (Bill) and Yvonne Hart. Mary was the 5th in a family of 6 little live wires. Mary was predeceased by her brother Thomas brother Leonard, mother Yvonne and father Bill (Gramps). Mary began her schooling in Mafeking, Manitoba and finished up graduating with honors from Notre Dame in Wilcox, Saskatchewan. She had a love for all things beautiful which led her into a career as a beautician. She graduated with her license from Winnipeg, Manitoba and took her first job in Dauphin, Manitoba. It was not long after arriving that she met the love of her life, the man she would later marry and stay committed to for 54 years, Erwin (Curly) Ritz. Erwin and Mary were married September 1, 1961 in Dauphin, Manitoba and 10 months later welcomed there first son Faron Murray Ritz. The young family soon moved on to Portage la Prairie, Manitoba where they had their second son Leon Rae Ritz. Curly took a position in Red Deer, Alberta which saw the family move there in 1966. Mary continued in the beauty industry becoming an instructor to all the new hopefuls. In 1970 the family was on the move again to Medicine Hat, Alberta where they had their youngest child a daughter, Tamala Michelle Ritz. In Medicine Hat Mary ran the local beauty supply company for many years. However in the early 80s Mary decided to make a dramatic career change and entered the world of financial investing. Mary was very successful over the years working for Pioneer and The Principal Investment Group. Through all her success in the financial industry she was able to take her husband on some amazing trips over the years. As Mary’s children grew and moved out her and Curly decided to move closer to her siblings and father and in 1991 moved to Kelowna, B.C. They enjoyed their time in the beautiful Okanogan Valley but the pull of their grandchildren brought them back to Alberta. So in 1996 they moved to Calgary briefly and on to Irricana, Alberta where they spent their last 18 years together. Mary love to sew and make quilts and would spend hours in her sewing room making everything under the sun. Mary was very active with the Irricana ladies Lions Club, she was also very active with the men’s Lions Club with many orders of the clubs personal vests. Mary love to cook and can, and would put pretty much anything you could put in a jar. Mary was always on the go there was no slacking when she was around and she was always keeping dad busy doing something. Mary’s home was always impeccably clean and you always felt welcome when you came that I’m sure she’s got a broom and her hand in heaven. If Mary was not keeping busy with all that you could find her kicking someone’s butt in a game of scrabble. Mary had a short but very courageous battle with cancer and she leaves to mourn her husband and best friend of 54 years Erwin (Curly) Ritz, son Faron (Oksana) Dakota, Sienna, Kaysia-Raye, Zahhra, & Alex, son Leon (Chandra, Caitlin, Ryan, & Bex, daughter Tamala (Doug) Cersten & Brayden, Mary’s brothers Bob (Barb), Cliff (Fran) sister Dodi (Murdi) and numerous nieces, nephews, cousins and relatives. Donations can be made in Mary’s name to the Alberta Cancer Society. Services will be held Thursday July 16, 2015 at the KIK hall in Irricana, AB.