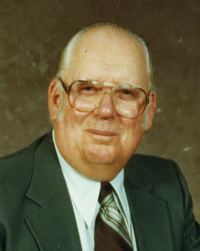 It is with heavy hearts and sadness that the family says goodbye to Dewald “Dave” Winkler who passed away peacefully on the Palliative Care Ward at the Medicine Hat Regional Hospital on Saturday, July 11th, 2015 at the age of 91 years, just two weeks shy of his 92nd birthday. Dave leaves to cherish his memory his children: Judy Pethick (Robert Clement) and her daughter, Wendy (Paul) Rubner; Larry Winkler and his children, Grant (Jane) Winkler, Brent Winkler, Chad (Denise) Winkler and Steven (Angie) Winkler, and his step-son, Jeff (Holly) Walker; Curtis (Vera) Winkler and their children, Kirby (Adrienne) Winkler and Nadine (Mike) Mueller; Diane Strafford and her son, Corey Winkler; and Shirley Bunting and her children, Michael Bunting (Christine) and Cameron Bunting (Anita); fifteen great-grandchildren; one brother, Don (Elaine) Winkler; two sisters, Evelyn (Bill) Plummer and Dorothy Sayler; as well as numerous nieces and nephews. Dave was predeceased by his first wife, Sophie in 1999; his second wife, Hilda in 2001; his parents, Theodore and Susie Winkler; his son-in-law, Richard Bunting; two brothers, Walter and Leonard Winkler; two sisters, Freda Christink and Pauline Swatkoff; four brothers-in-law, Vern Sayler, Art Kandt, Bill Christink and Walter Swatkoff; and two sisters-in-law, Viola Winkler and Emma Kandt. Dave was born near Golden Prairie, Saskatchewan. He farmed in the area until 1955 when he moved to Medicine Hat. Dave worked as a carpenter in the construction industry working at CFB Suffield until retiring at 65 years, however, he continued to do jobs on the side. He was very musical and loved fishing, hunting, fixing things and especially going to Lake Newell where he had a second family. Dave will be lovingly remembered by his family and friends. Those wishing to pay their respects may do so at SAAMIS MEMORIAL FUNERAL CHAPEL, #1 Dunmore Road SE, on Wednesday from 7:00 to 9:00 p.m. and on Thursday from 10:00 a.m. to 12:30 p.m. The Funeral Service will be held at SAAMIS MEMORIAL FUNERAL CHAPEL on Thursday, July 16th, 2015 at 1:30 p.m. with Reverend Dr. Patrick Schoenberger officiating. Interment will follow in the Family Plot at Redcliff Cemetery. Memorial gifts in Dave’s memory may be made to the Medicine Hat & District Health Foundation, Palliative Care Unit, 666 – 5th Street SW, Medicine Hat, Alberta, T1A 4H6, or to AJ’s Loan Cupboard, Box 45006, Mackenzie Drugs Postal Outlet, Medicine Hat, Alberta, T1A 0B1. Condolences may be sent through www.saamis.com or to condolences@saamis.com subject heading Dave Winkler. Funeral arrangements are entrusted to