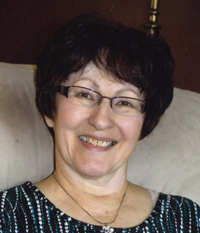 Carmen Rose Codding, beloved wife of Edward “Ed” Codding, passed away peacefully at St. Joseph’s Home on July 11th, 2015 at the age of 69 years. She also leaves to cherish her memory her mother, Florence Bicketon; sisters, Valerie (George) Russell and Gerry (Dennis) O’Connor; children, Arthur (Vanessa) Bosgra, Andrew (Amanda Oldfield) Bosgra, Cara (Miguel Aguirre) Bosgra, and Michelle (Robert) Warren; step-children, Dana (Kris Read) Codding and Nathan (Michelle) Codding; grandchildren, Angel, Gabriel, Ebony-Dawn, Emiliano, Sebastian, Charles, David, Jack, Tiegan and Jeremy; along with numerous aunts, uncles, cousins, nieces and nephews. Carmen and her twin sister, Valerie, were born in Edmonton and raised in Ralston. From her youth she was a “God Chaser” and “Jesus Lover”. After the ninth grade she entered a convent in Medicine Hat with the Sisters of Charity of Saint Louis to discern whether she had a calling on her life to join the Sisterhood. After four years she decided not to take her final vows and returned to the secular world. She moved to Calgary and enrolled in the nursing program at the University of Calgary, discovering that she was not meant to be a nurse. She began working as a geological assistant in the oil patch where she remained until children began arriving. She met Ed while playing bridge and they were married in 1987 in Calgary. In 1992 they moved to Fort McMurray where they lived until Ed retired in 2003 and they moved to Redcliff where they still lived. Carmen’s passion for Jesus defined her life. While in Fort McMurray she became the President of the local Aglow International Chapter, a Christian women’s organization. Through Aglow, Carmen began teaching workshops and seminars on a wide variety of Christian topics, all encouraging women and men to chase after God, seek intimacy with Jesus and hunger for the Holy Spirit. She and Ed were members of the core teams that began the Alpha Course at St. Thomas’ Anglican Church and introduced the Live-In and Get to Know Jesus Weekend Retreats in Fort McMurray. In 2005, Carmen and Ed moved to Malaysia where they operated a guest/vacation house for missionaries in South East Asia, returning to Redcliff in 2009. While there, they organized and participated in Prayer Retreats, gathering people from around the world to pray for the countries and peoples in the region. The relationships they built with fellow missionaries and local peoples have endured to this day. When they returned to Redcliff, Carmen joined the Aglow Southern Alberta Area Team which gave her the opportunity to continue teaching workshops and seminars in addition to helping organize and present weekend retreats and conferences for Aglow members in southern Alberta. She also served two years as President of the Women’s Auxiliary to the Redcliff Legion Branch #6. We are deeply saddened by the loss of a wife, daughter, mother, sister, grandmother, aunt, best friend, teacher, mentor and woman of integrity. Her legacy remains with the people she encouraged to seek Jesus and the Holy Spirit with all their hearts, a legacy which deeply touched many people. While we are saddened, we rejoice with the assurance of Jesus that she is dancing with Him in her Father’s house, which is where she belongs! We want to extend a very special Thank You to the staff of St. Joseph’s Home for the kindness, care and compassion you gave to Carmen while she was with you. You are truly special people. The Funeral Service will be held at ST. BARNABAS ANGLICAN CHURCH, 635 – 4th Street SE, on Friday, July 17th, 2015 at 11:00 a.m. with Reverend Canon D. Gene Packwood officiating. Interment will follow at Redcliff Cemetery. In lieu of flowers, memorial gifts in Carmen’s memory may be made to the Carmel Hospice, St. Joseph’s Home, 156 – 3rd Street NE, Medicine Hat, Alberta, T1A 5M1. Condolences may be sent through www.saamis.com or to condolences@saamis.com subject heading Carmen Codding. Funeral arrangements are entrusted to