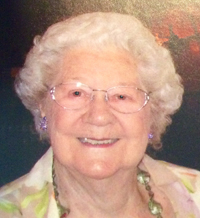 The second of eight children born to Cyril and Nella Lloyd, Pansy, though born in Wales, grew up in Calgary. In l941 she married John Kingsley Knights, a Pathfinder Navigator, who was shot down over Germany in l945. Later she met and married his cousin, Frederick Henry Fisher and they lived and raised their family in Medicine Hat, where Fred was a high school teacher and administrator.

Pansy devoted herself always to others, her family, friends and those less fortunate. She made her home a happy, welcoming refuge filled with the aroma of baking and good food. There was not a selfish bone in her body and she led by example. She stands at the top of the Hero list for many people whose lives she touched. She and Fred traveled the world, visiting many places inaccessible now in six of the seven continents, and she gathered memories and friends along the way.

Her family and their activities became her life, especially during the last five years when she was fortunate to live in Victoria. A woman of deep faith, she told us daily how blessed she was, but it was her children, grandchildren and great grandchildren, who were really the lucky ones.

Her service will be August 22 at St. Margaret’s, Eagle Butte.