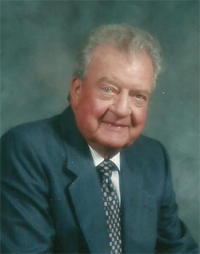 Jack attended Suffield Public School and then high school at St Theresa’s Academy in Medicine Hat. His first job was in High School driving a gravel truck for his uncle Norm Nowicki. Upon completion of High School, Jack got a job with the Canadian Pacific Railway where he was employed for 42 years. During that period of time he met his wife Dorothy and they were married December 12, 1959 . Their only child Murray was born in 1960. Jack was first employed as an Assistant Agent, Cashier, Telegraph operator, and finally as a mobile Supervisor for the last 25 years. Jack retired from the railway in 1992. He was an avid curler, golfer, and fastball player. For numerous years he took a rink to the CPR bonspiel in either Golden or Revelstoke. As Jack was born during the great depression, hunting was a way of life for many families to supplement their diets and put food on the table. Because of this he learned how to use a firearm responsibly and enjoyed many years of hunting deer, antelope, moose, bear, pheasants, and partridge. Early on he took up the sport of trapshooting, traveling to shoots all over Canada and the United States. His skill collected him many trophies and plaques over the years. Jack spent many years working with Brooks Fish and Game Club which worked to educate people on safe handling of firearms and proper hunting practices. He spent many years volunteering at the Brooks Trap Club and later The Brooks Clay and Feathers Club, where he fired the Ceremonial First Shot during the opening ceremonies on May 7, 2005. After retirement, Jack experienced many medical issues resulting in two new knee’s and a hip replacement. On January 26, 2008 Jack had a subdural hemorrhage which required hospitalization rehabilitation and reassessment. As a result, Jack needed to live in Long Term Care for the rest of his years. Throughout this experience he retained his sense of humor and personality. Dorothy and Jack moved to Hanna in September 2011 to be closer to son Murray and his family.

A celebration of Jacks life will be held July 24 at 1 pm at the Brooks Heritage Inn Meeting Room D.

If friends desire, memorial tributes may be made to a charity of their choice.