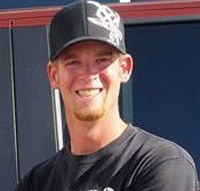 The Bell family mourns the sudden passing of their oldest son Reio Bell. He is survived by his parents George and Leora, his brother, Lachlan and his brother’s wife, April. He also leaves behind his grandparents on his mom’s side, lots of aunts, uncles and cousins on both sides of the 49th parallel, as well as the people he adopted. He will be greatly missed by his sweetheart, Kayla Richardson, of Regina, Saskatchewan and her family. The world is a quieter, lonelier place without him in it.

Reio was born on August 3, 1988 in Medicine Hat Regional Hospital. He loved working with his dad. Even as a toddler it was all about tools, he would follow Dad around copying all his actions. He was active in Beavers and Cubs and then went on to Air Cadets, he aged out as an acting flight sergeant. Reio was generous and loyal. He would give you the shirt off his back, fight to protect those he loved and for what he believed in. He loved children and they loved him right back. He was a bringer of small wonders, a part of a robin’s egg, a beautiful rock, something that he thought you might find useful. And boy could he talk. It took him a while to learn to talk but once he got the hang of it was hard to get a word in edgewise. He was a warrior. He was funny and irreverent. Reio’s smile lit up the room, his laughter begged you to join in. He was an incorrigible mimic. If your kid was fundraising he always bought whatever they were selling. If you needed rocks moved or furniture carried Reio was there to lift and carry and help where he could. He struggled in school, but tried his hardest. He loved doodling, the outdoors, fishing and working with his hands. He would walk round and round a project, envisioning the finished product and diving right in.

Reio spent most of his adult life fighting demons we could not see. He tried hard to rise above and conquer them. Life was hard for him but he kept trying. A celebration of Reio’s life August 1, 2015, details are still being worked out. Please no flowers; instead donations to Canadian Mental Health, CORE Association Children’s Services or the SPCA would be a wonderful way to honor him.