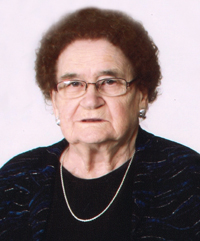 Erna Edna Bauer passed away peacefully, surrounded by family and friends on Thursday, July 16th, 2015 at the Good Samaritan’s Society at the age of 87 years. Erna leaves to cherish her memory her daughter, Glenda of Medicine Hat. She is also survived by one brother-in-law, Lloyd Schick; and two sisters-in-law, Caroline Bauer and Bertha Soderquist; as well as numerous nieces, nephews and several special friends. She was predeceased by her husband, Henry on August 8th, 1980; two infant sons, Charles in 1949 and Marvin in 1957; her parents, Raymond and Bertha Hippe; one sister, Adella Schick; two brothers, Edmund and Richard Hippe; and in-laws, Henry (Rosina) Bauer, Edward (Katie) Schmitt, John Bauer, Gottfried (Lydia) Kelln, Paulina “Rose” Retzer, Fred Bauer, Jack (Mary) Bauer and Charlie (Dorothy) Bauer. Erna was born, raised and educated in the Mendham, Saskatchewan area. She married Henry on April 14th, 1948 and together they farmed 3 miles east of Burstall before retiring to Burstall in 1975. Erna moved to Medicine Hat in 1981 after Henry’s passing. She enjoyed gardening, quilting, crocheting and traveling. Erna was very involved in the church with choir and preparing funeral and other lunches. She will be greatly missed and lovingly remembered by all those who knew her. Those wishing to pay their respects may do so at SAAMIS MEMORIAL FUNERAL CHAPEL, #1 Dunmore Road SE, on Monday from 7:00 until 9:00 p.m. and at VICTORY LUTHERAN CHURCH, 2793 Southview Drive SE on Tuesday from 12:00 until 12:55 p.m. The Funeral Service will be held at VICTORY LUTHERAN CHURCH, on Tuesday, July 21st, 2015, at 1:00 p.m. with Reverend Jim Bredesen and Diaconal Minister Lila de Waal co-officiating. A Private interment will take place at Saamis Prairie View Cemetery. Memorial gifts in Erna’s memory may be made to Alberta Heart and Stroke Foundation, 124, 430 – 6th Avenue SE, Medicine Hat, AB, T1A 2S8 or to Alzheimer Society, 547 – 4th Street SE, Medicine Hat, AB, T1A 0K7. Condolences may be sent through www.saamis.com or to condolences@saamis.com subject heading Erna Bauer. Funeral arrangements are entrusted to