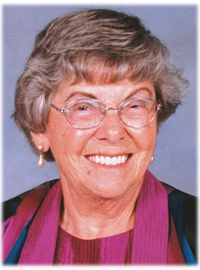 Jean Morris (nee Good), beloved wife to William Henry (Bill) Morris, slipped away peacefully with the dawn on July 16, 2015 at the age of 88 years. Jean will always be remembered for her love of life, independent spirit, sense of humour, and twinkling eyes. Following Bill’s death in 1965, Jean went back to school and in 1972 became one of the first mature female students to earn a Bachelor of Commerce (Accounting Major) from the University of Calgary. She went on to work for Alberta Gas Trunk Lines (Nova Corporation) in various senior accounting roles for over 10 years. After her retirement in 1984, Jean became an avid traveller, making it to every continent except Antarctica. As the daughter of Carl and Ida (nee Brost) Good, Jean was born into two pioneer ranching families. She grew up on the family ranch just north of the Cypress Hills and never lost her love of wide open spaces and big skies. Jean and Bill had three children: Maureen Jean (who died in infancy), Marleen Jean (Andrew Young), and William Charles (Chuck) (Pamela Burgess). Jean also had two grandchildren, Krista and Scott Morris, and followed their accomplishments in sports and school with great pride. Jean was an inspiration and a source of strength for her family and many others whose lives were touched by her spirit. Those wishing to pay their respects may do so at Cook Southland Funeral Chapel, 901 -13 Street S.W., Medicine Hat on Friday, July 24, 2015, from 4:00 p.m. to 8:00 p.m. and again one hour prior to the service. A Funeral Service to celebrate Jean’s life will be held at Cook Southland Funeral Chapel on Saturday, July 25, 2015, at 2:00 p.m. with Reverend Dr. Nancy Cocks officiating. Interment will follow at Hillside Cemetery. (Condolences may be expressed by visiting www.cook southland.com) Honoured to serve the family is