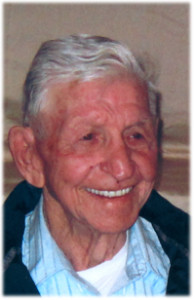 Mr. Walter Harvey Gladu, beloved husband of Mrs. Margaret Gladu of 62 years, passed away peacefully with his family by his side on Monday, July 20, 2015, at the age of 82 years. Walter leaves to cherish his memory, his loving wife, Margaret; seven children, Keith (Jill Shupe), Jeanette Frey, Pat (Henry) Aaker, Wayne (Maureen), Kristine (Rod) Bosch, Karen (Albert) Haggstrom and Kenny; son-in-law, Glenn Dorn, 16 grandchildren and 19 great-grandchildren. Walter is also survived by three brothers, Len of Winnipeg, MB, Jack of Barrie, ON., and Brian of Gravenhurst, ON; one sister, Patsy and one brother-in-law, Albert both of Winnipeg. Walter was predeceased by his daughter, Judy; grandchildren, Candace and Robert, great-grandson, Braden; two brothers, Gilbert and Ernie; sister, Pearl and his parents, John and Lena. Walter was born in Portage La Prairie, MB., on December 14, 1932, and married Margaret Mitchell on February 28, 1953. They moved to Medicine Hat from Winnipeg in May of 1967. Walter was a carpenter by trade and ran his own business, WH Contractors. He raised and raced pigeons with his nephew, Gordon and was an avid pony chariot and chuckwagon racer for many years. Walter enjoyed quarter horse racing and became an avid golfer later on in life. If friends so desire, memorial tributes in Walter’s name may be made directly to Holy Family Parish, 1451 Strachan Road S.E., Medicine Hat, AB., T1B 4V3. Those wishing to pay their respects may do so at Cook Southland Funeral Chapel, 901 – 13 Street S.W., Medicine Hat, one hour prior to the Funeral Service being held on Friday, July 24, 2015 at 2:00 p.m. with Reverend Father Philip Le as Celebrant. Interment will follow at Hillside Cemetery. (Condolences may be expressed by visiting www.cooksouthland.com) Memorial donations in Walter’s name may be made directly to Holy Family Parish, 1451 Strachan Road S.E., Medicine Hat, Alberta, T1B 4V3. Honoured to serve the family is