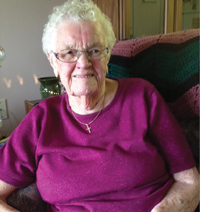 “My parents were Jochum Jager and Barteldina Klein. They named me Geessien. I was the fourth of 14 children. On the 4th of August, 1945 I married my childhood sweetheart Margienus Langejans in Enschede, Holland. His parents were Johannes Langejans and Henderkien Reening. Life was difficult in Europe then. In May, 1954 we and our three children Hans, Ina and Jope began a new life in Calgary, Alberta, Canada. My husband worked as a baker and I worked by his side in our bakery in Brentwood. Marty and Dianne were born in Calgary. In 1979 Martin and I moved to Medicine Hat because all the kids except Jope were here. My husband died in 1990. I have been with the wonderful friends at Chinook Village since 1996. Our son Marty died in 2012. I am very happy now that my family has 22 grand children, 22 great- grandchildren and 4 great great grandchildren… and another great grand daughter on the way.”

We invite you to share in the celebration of life for our beloved mother Gaye Langejans at the Saamis Funeral Home at 2 pm on Wednesday July 29.