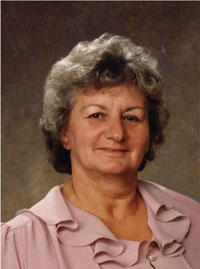 Ruth Jesske, beloved wife of Edwin Jesske of Medicine Hat, passed away on Monday, July 27th, 2015 at the age of 84 years. Ruth also leaves to cherish her memory her children, David (Jacquie) Jesske, Hope Roeder, Allan (Nancy) Jesske, Bonnie Haas, Lottie (Chris) Warren-Williams, Kim (Gary) Franz, and Neil (Kathleen) Jesske; her grandchildren, Kevin (Alison) Jesske, Crystal (Doug) Hanson, Kurt (Robyn) Roeder, Kelly (Darryl) Marcocchio, Candace Freisen, Carl and Craig Jesske, Wesley and Trevor Haas, Robert (Kristi) Campbell, Melissa Campbell, Korissa Franz (Mike), Taylor, Lacey, and Mckenzie Franz, and Evan Jesske; numerous great-grandchildren; lifelong friend, Hilda (Ben) Marling; her sister, Alice (Edwin) Kanewischer; her sisters and brothers-in-law, Marie Schuetzle, Ida Pudwell, Emil Jesske, Elma (Albert) Herrman, Millie (Morley) Desjardine, Arlene Jesske and Emma Jesske; her aunt, Esther (Ben) Reinheller; as well as numerous nieces and nephews. Ruth was predeceased by her parents, Henry and Lydia Schuetzle; an infant son, Larry; her son-in-law, Wade Haas; her grandson, Ladel Freisen; one sister; and seven brothers. Ruth was born on February 21st, 1931 in Schuler where she was raised before moving to Medicine Hat with her family to live on Yuill Street. Across the street, she saw a young man who became the love and soulmate of her life, Edwin Jesske, and they married on October 22nd, 1948. They lived in Richmound and Medicine Hat before moving to fulfill their dream to farm in Schuler in 1959. Their thoughts to retire began in 2007 when they bought a condo in Chinook Village. Ruth’s gift was giving and many people were recipients of that gift. If you dropped by, she always had something for you to munch on. If you stayed for a meal, she could whip up a spread in no time. It always amazed us how Ruth seemed to have nothing in her fridge but could still make a feast from that nothing. Ruth was active in the community and the Schuler Church of God, always willing to help as a cook, board member, janitor, chairwoman, singer and anything else there was to do. Ruth’s family was very important to her and she made each one feel special. It seems her length of time here was still too short. Thanks Mom, you will be missed. Those wishing to pay their respects may do so at SAAMIS MEMORIAL FUNERAL CHAPEL, #1 Dunmore Road SE, on Thursday from 7:00 to 9:00 p.m. The Funeral Service will be held at SOUTHVIEW CHURCH OF GOD, 2366 Southview Drive SE, on Friday, July 31st, 2015 at 2:00 p.m. with Pastor Bob Church officiating. A Private Interment will take place at Saamis Prairie View Cemetery. Memorial gifts in Ruth’s memory may be made to St. Joseph’s Home (Carmel Hospice), 156 – 3rd Street NE, Medicine Hat, Alberta, T1A 5M1. Condolences may be sent through www.saamis.com or to condolences@saamis.com subject heading Ruth Jesske. Funeral arrangements are entrusted to