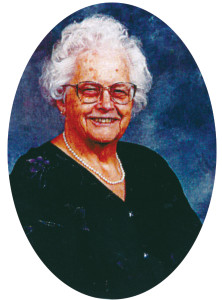 Wartman, Florence Ruth (nee Armstrong) was the second daughter of Jack and Algerta Armstrong. She was born August 7, 1921. She took her Grade Twelve in Aylsham, SK and after high school she attended Normal School in Saskatoon. She taught at Armley School from Sept 1941 to June 1942.

Florence had strong leadership abilities and loved working with people. She was secretary treasurer of the Aylsham United Church for 15 years as well as President of UCW, President of Presbyterial UCW and attended World Council of Churches in Vancouver.

She worked in “Home and School”, Farmer’s Union and attended Women of the World held in Michigan. She spent 20 years with the Horticultural Committee, president of the figure skating club and a dedicated member of the Rebekah Lodge. She spent her free time gardening, reading, knitting, loving music, as well as being a devoted wife, mother, grand and great grandmother. Florence is predeceased by her husband David, parents Jack and Algerta Armstrong, sister Barbara Rusk, brother-in-laws Don Rusk, Doug Bocking, Rev.Bruce, Ed and sister-in-law Doris Wartman.