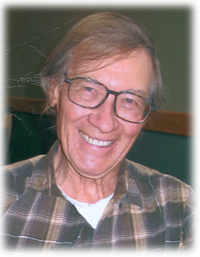 It is with heavy hearts that the family of Alvin E. M. Hoffman of Medicine Hat, announce his passing at the Medicine Hat Regional Hospital on Thursday, July 30, 2015, at the age of 87 years. He leaves to cherish his memory his three children; Annamae Couillard, Donella Joyce (Scott) Davidson, Howard Robert Orleans Hoffman; siblings, Earl Hoffman, Esther Pogachnik, Genie Johnston, Eileen (Mickey) Dixon; six grandchildren and five great-grandchildren. Alvin was predeceased by his parents, Ernest and Anna Hoffman; three brothers and two sisters. Those wishing to pay their respects may do so beginning one hour prior to the service which will be held at Cook Southland Funeral Chapel, 901 – 13 Street S.W., Medicine Hat on Friday, August 7, 2015, at 10:30 a.m. with Life Celebrant Gerry Getz officiating. Interment will follow later in the day at Redcliff Cemetery. If friends so desire, memorial tributes may be directed to the Heart and Stroke Foundation of Alberta, #124, 540 – 6 Avenue S.E., Medicine Hat, Alberta T1A 2S8 or to the Alzheimer Society of Alberta, 401D – 3rd Street S.E., Medicine Hat, Alberta, T1A 0G8. (Condolences may be expressed by visiting www.cooksouthland.com) Honoured to serve the family is