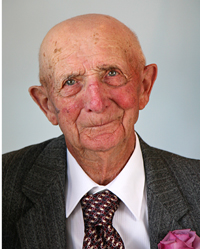 Frank Adrian Van Ham, beloved husband of Johanna Van Ham, passed away in Bow Island on Monday, August 3, 2015 at the age of 101 years.

Franciscus Adrianus Van Ham was born on November 5, 1913 in Zundert, The Netherlands, the youngest of six sons and one daughter born to Maria and Johannes Van Ham.

Frank and Johanna (nee Roelands) were married in 1948. They farmed near Zundert as they welcomed nine children. In 1967, the family immigrated to Bow Island, farming in the area until 1999, at which time Mom and Dad moved into Bow Island. Dad was able to enjoy driving tractor until he was ninety five years of age.

Throughout his life, Dad demonstrated his love of family, strong faith, determination and a quiet humour. With Mom, he enjoyed his home, countless crop tours, card games and gatherings with family and friends, to his final days.

The Funeral Mass will be celebrated at St. Michael’s Catholic Church, 1113 – 1 Street East, Bow Island on Saturday, August 8, 2015 at 10:30 A.M. A private burial service will follow at the Bow Island Cemetery. Condolences may be forwarded by visiting our website at www.southlandfuneral.com.