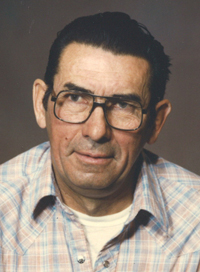 Leslie Clarence Frickie of Medicine Hat, passed away on Friday, July 24th, 2015 at the age of 81 years. Leslie leaves to cherish his memory his brother, Patrick Frickie; three sisters, Shirley (Ken) Wall, Isabelle Buehler and Joanne (Ken) Kjelsberg; adopted granddaughter, Deborah (Harrison) Smith and daughters, Alexis and Savannah; his aunt, Maxine Frickie; as well as numerous nieces and nephews. Leslie was predeceased by his parents, Clarence and Mary Frickie. Leslie will be missed by his family and the many friends he made at the Cecil over the last 25 years. A Private Family Time of Remembrance will be held. Memorial gifts in Leslie’s memory may be made to The Salvation Army, 164 Stratton Way SE, Medicine Hat, Alberta, T1B 3R3. Condolences may be sent through www.saamis.com or to condolences@saamis.com subject heading Leslie Frickie. Funeral arrangements are entrusted to