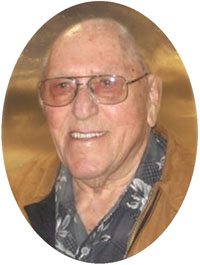 It is with sadness that the family of Emil Gehring of Medicine Hat and resident of the Pleasant View Lodge, Bow Island, beloved husband of Mary Gehring of Bow Island, announce his peaceful passing on Friday, August 7, 2015, at the age of 89 years. Emil was born in Hilda, AB., and raised in Surprise, AB. He married the love of his life, Mary Haas, in 1947 and moved to Pivot where he worked as an Elevator Agent. Their next move saw them make their home in Lemsford, SK. They enjoyed 14 wonderful years there, highlighted by the births of their four children. They then moved to Medicine Hat where Emil sold cars for the next 35 years. During his retirement years, he enjoyed gardening, watching Tiger Hockey games and Mavericks Baseball. Emil will forever be remembered for his crooked smile. Along with his wife, Mary, Emil’s memory will be cherished by his daughters, Diana (Victor) Marion and Sandra (Clarence) Archer, both of Medicine Hat; Wanda (Terry) Lane of Burdett, Michelle LeBlanc (Stuart Bradley) of Jenner; grandchildren, Felicia, Shawn, Tina, Cheryl, Justin, Jenna, Chad, Amber, Jessa, Shane, Bonnie, Amber, Justin and Bailey; great- grandchildren, Keanna, Rieley, Marissa, Charlie, Brian, Kayla, Taylor, Stephanie, Megan, Tristen, Lincoln, Jak, Nora, Katie, Khloe, Trinity, Jaiden, Rylan, Sophie, Savannah, Scarlett, Brianna and Skyler; one brother, Leonard (Freda) Gehring as well as numerous nieces and nephews. He was predeceased by his parents, four brothers and one sister. Emil’s life will be cherished without the proceedings of a formal funeral service. (Condolences may be expressed by visiting www.cooksouthland.com ) Honoured to serve the family is