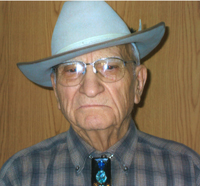 It is with sadness that we announce Frederick “Fred” Flaig has passed away to be with his Lord and Saviour on Sunday, August 9th, 2015, beloved husband of the late Ruth Flaig. He leaves to cherish his memory two sons, Larry (Carma) Flaig and Keith (Teressa) Flaig; and one daughter, Karen (Tim) Hittel. Fred also leaves two grandchildren, Kevin (Erin) Hittel and Kristi (David) Stevens; four great grandchildren, Koby and Rhys Hittel and Reid and Kipp Stevens; as well as numerous nieces and nephews. He was predeceased by his wife, Ruth in January of 2014; a precious son, Douglas Morley in infancy; a grandson, Richard Lawrence Flaig; three brothers, Adam, John and Jack; and five sisters, Bertha Senft, Olga Kanewischer, Lily Willushaw, Ella Stickel and Esther Kundert. Fred was born, raised and educated in Medicine Hat and Hilda, Alberta. He married Ruth Boettcher on January 20th, 1945 and they continued to farm and worked together to raise a family. Dad served as Councilor in the R.M. of Enterprise #142 for some years. He also served on the Board of Directors for the Co-op in Horsham, Saskatchewan and also the Alberta Wheat Pool. Fred attended the Evangelical Church in Hilda and held various offices for many years. He was very active in teaching and choir. They retired and moved to Medicine Hat in 1975, where Fred worked for the city park shop as a Shopman and also as a Realtor for several years. He loved camping and fishing and would take his grandchildren making for many memorable memories. His coffee times conversing with his friends was the happiest they spent. They spent their last years in Chinook Village and then later in the Haven Care Centre and Good Samaritan Society and received the most loving care. We know now that he will be eternally happy and at peace reuniting with his most loved wife, Ruth. May you both rest in peace, leaving us with precious memories of you both. We are ever so proud to say, “You were our parents.” Those wishing to pay their respects may do so at SAAMIS MEMORIAL FUNERAL CHAPEL, #1 Dunmore Road SE, on Tuesday from 7:00 until 9:00 p.m. and on Wednesday from 10:00 a.m. to 1:55 p.m. The Funeral Service will be held at SAAMIS MEMORIAL FUNERAL CHAPEL on Wednesday, August 12th, 2015 at 2:00 p.m. with Pastor Mark Bolender officiating. A private interment will take place at Saamis Prairie View Cemetery. Memorial gifts in Fred’s memory may be made to Palliative Care Unit, c/o Medicine Hat and District Health Foundation, 666 – 5th Street SW, Medicine Hat, Alberta, T1A 4H6. Condolences may be sent through www.saamis.com or to condolences@saamis.com subject heading Fred Flaig. Funeral arrangements are entrusted to