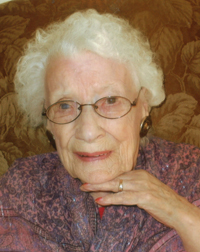 Jean “Jeanie” Ogilvie of Medicine Hat, beloved wife of the late Harry Ogilvie, passed away on Friday, August 7th, 2015 at the age of 92 years. Jeanie leaves to cherish her memory her children, Alan (Carol) Ogilvie, Rosemary Ogilvie and Dolores Powers; grandchildren, Annette (Roy) Graf and son, Daniel, Patricia (Mike) Rolls and sons, Jeremy and Logan, Renee (Kevin) Hirsch and sons, Mitchell and Easton, Alan Hindle, Liz Ogilvie Yung (Brad) and son, Harry, Andy Ogilvie LaChance (Don) and son, Griffin and daughter, Camden, Andrew (Alicia) Powers and son, Cohen and Molly (Mark) Bujold; as well as numerous nieces and nephews. Jeanie was predeceased by her husband, Harry; her parents; and one grandson, Alexander Graf in 2014. Born in the Canongate of Edinburgh in the twenties, Jean, or as she was often known ‘Jeanie’, was a force of nature. One of eleven children born in abject poverty in one of the poorest districts of Edinburgh she was a clever girl who did not have a chance of an education. She looked out for her widowed mother and her younger siblings as best she could. She loved fashion; she had a great figure; she made her patterns and then burned them so no one could copy her style. She met Harry (our dad) at the Palais de dance and for the duration of WWII she led him on a merry chase as to whether she was interested in him or not. She spent the war years in Coventry in England. Because she had the daintiest of hands she was responsible for lowering the business end of the bombs into the planes. She absolutely coerced our father into immigrating to Canada in 1957 and we don’t think she ever regretted this once she got used to the new country. Mom worked all over…AGT (when it was), Auxiliary hospital (she was a cook), British army base in Suffield, (she was a shop steward…one of her proudest moments was managing to get a new toilet for the women). Then she was retired. Then our dad died and the heart went out of her. The two of them battled royally for over 60 years, yet they wrote letters to each other when they were apart. We lovingly remember our mom and grandma, her singing, her lovely manners and her funnies, which were many. To our dad who died ten years ago in 2005, ‘You’ve had a good long break, Dad, but here she comes.’ The Funeral Service will be held at SAAMIS MEMORIAL FUNERAL CHAPEL, 1 Dunmore Road SE, on Friday, August 28th, 2015 at 11:00 a.m. with Gary W. Goran officiating. A private interment will take place at Hillside Cemetery. Memorial gifts in Jeanie’s memory may be made to Mission Mexico (Alex’s Welding Room), c/o St. Michael’s Parish, P.O. Box 56, Bow Island, AB T0K 0G0. Condolences may be sent through www.saamis.com or to condolences@saamis.com subject heading Jeanie Ogilvie. Funeral arrangements are entrusted to