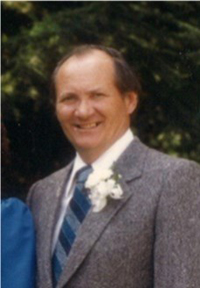 Gerald Lawrence Giese of Medicine Hat, beloved husband of Freada Giese of 62 years, passed away on Thursday, August 13th, 2015 at the age of 83 years. Gerald also leaves to cherish his memory his children, Melinda (Paul) McNie, Vivian (Douglas) Fox, and Calvin (Leila) Giese; eight grandchildren; seven great grandchildren; his brother, Vernon Arndt; aunts, nieces, nephews and special friends. Gerald was predeceased by his mother, Helene; step father, Richard Yates; brother, Armond Arndt; and Freada’s parents, Adam and Ida Schmidt. Gerald was born on May 6th, 1932 in Edmonton and grew up in Stony Plain, Alberta. From 1957 – 1979 Gerald worked with Northwest Nitro Chemicals in Medicine Hat and relocated to Brooks, where he worked for oilfield rig moving companies until 1996 when he retired and moved back to Medicine Hat. In lieu of flowers, donations may be made to the Alberta Heart and Stroke Foundation, 124 – 430, 6th Avenue SE, Medicine Hat, Alberta, T1A 2S8, or to the Tom Baker Cancer Clinic, 1331 – 29th Street NW, Calgary, Alberta, T2N 4N2. The Funeral Service will be held at SAAMIS MEMORIAL FUNERAL CHAPEL, 1 Dunmore Road SE, on Wednesday, August 19th, 2015, at 10:30 a.m. with Donovan Mutschler officiating. A Private Interment will follow at Saamis Prairie View Cemetery. Condolences may be sent through www.saamis.com or to condolences@saamis.com subject heading Gerald Giese. Funeral arrangements are entrusted to