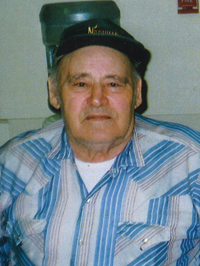 Joao “John” Pereira Rosa of Medicine Hat, beloved husband of Lena Rosa, passed away on Tuesday, August 11th, 2015 at the age of 82 years. John leaves to cherish his memory his two step-sons, Reg (Sharon) Greenfield and Bernie (Carol) Greenfield; his daughter-in-law, Darlene Greenfield; 11 grandchildren; 17 great grandchildren; and one great-great granddaughter. He was predeceased by one brother, Frank from Calgary; and 3 step children, Dale, Wayne and Debbie Greenfield. John was born on June 27th, 1933 in Portugal. He was educated in Cedros, Portugal in a Military Academy. At the age of 20, John was recruited in to the Portuguese Military and remained there from 1953-1954. On April 19, 1957 John landed in Canada and immediately began working with the CPR starting with the track maintenance gangs. He worked the track in Medicine Hat and eventually Burstall, Saskatchewan; where he remained until his retirement. John married Madgalena “Lena” Greenfield on May 30th, 1970. Lena and John moved to Medicine Hat to bring his Lena closer to medical facilities. They bought a home in Redcliff and John found he loved to garden. It wasn’t long before John began his descent into Alzheimer’s and moved to the Riverview Care Centre. His loving wife would visit him daily, even as her own health failed. After losing his beloved Lena, the staff at the Riverview Care Centre lovingly and professionally cared for John until his passing. It is at this time that John’s family wishes to acknowledge and give thanks to the Staff of Riverview Care Centre for becoming family to so many of the residents they care for, including John. Thank you from the bottom of our hearts. Those wishing to pay their respects may do so at SAAMIS MEMORIAL FUNERAL CHAPEL, #1 Dunmore Road SE, on Monday, August 17th, 2015 at 12:30 p.m. The Funeral Service will be held at SAAMIS MEMORIAL FUNERAL CHAPEL on Monday at 1:30 p.m. with Father John L. Maes officiating. A Private Interment will follow in the Roman Catholic Section at Hillside Cemetery. Memorial gifts in John’s memory may be made to Alzheimer Society, 547 – 4th Street SE, Medicine Hat, AB, T1A 0K7. Condolences may be sent through www.saamis.com or to condolences@saamis.com subject heading John Rosa. Funeral arrangements are entrusted to