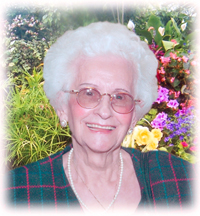 Mrs. Eve Isaac, beloved wife of the late Mr. Harry Isaac, passed away peacefully at the Medicine Hat Regional Hospital on Thursday, July 2, 2015, at the age of 96 years. Eve was born in Fox Valley, Saskatchewan on December 23, 1918. She is survived by her son, James Isaac (Dorita); brother, Tom Sitter; sister, Rose Sitter; grandchildren, Angie Isaac (Shawn), Lori Isaac (David) and Timothy Isaac (Kim); great-grandchildren, Ayda, Isabella, Jaxon and Emmitt; daughter-in-law, Helen Isaac (Bill); nephew, Richard Dukes; special friend, Caroline Eberle as well as numerous nieces and nephews. Eve was predeceased by her beloved parents, Frank and Magdalena Sitter; husband, Harry Isaac and eight siblings. Eve often shared fond memories of growing up on the farm in Fox Valley with her parents, brothers and sisters. Being one of the youngest in the family, she often accompanied her mother, who catered large weddings and other events in the surrounding communities. It was there, learning alongside her mom, that she grew into a talented and incredible cook. As a young woman, Eve moved to Medicine Hat with one of her sisters. She cherished her work at George P. Vanier School with special needs children. She was an active member of the Catholic Church and founding member of Camp McCoy (Catholic Boys Camp) where she volunteered many summers to run the dining hall. Eve and two friends also ran the concession at the Medicine Hat Curling Rink and she then became the Pastry Chef at the Medicine Hat Inn, where she worked until retirement. Even in retirement, Eve kept busy. In addition to spoiling her cat Pooh, she was a regular volunteer at the Veiner Center and long-time volunteer at the POST where she received an award and special recognition upon reaching her 15th anniversary. She made many special friendships and contributed to many lives while volunteering. Eve was loving, compassionate, and incredibly gracious, putting everyone else’s needs before her own. Her family always came first. She was a second mother to her granddaughters growing up, who could not wait until the weekend so they could get over to their Granny’s house. Eve then proceeded to play endless hours of cards, darts and shoe store, and never seemed to mind spending the entire day at Lion’s Park. She loved being with family and friends. Holidays, birthdays and other special occasions were a particular favorite, and she would spend entire days in her kitchen baking cinnamon buns, kuchen and making perogies with her sister, Barb. Family gatherings always included a rather spirited game of 31, or were filled with music and dancing in the Duke’s basement. Eve loved to dance, even at 96. She will be remembered with love by her family and friends. A Private Celebration of Eve’s life will be held later this week. (Condolences may be expressed by visiting www.cooksouthland.com) Honoured to serve the family is