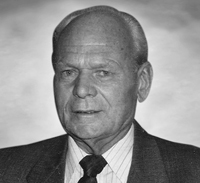 Albert Necker, beloved husband of Elvire Necker (nee Eberhardt) of Calgary, passed away on Tuesday, September 1, 2015 at the age of 92 years. Albert is survived by his son Bernie (Carllie) Necker; his grandchildren, Carmyn (Chris) Prefontaine, Daniel (Tracey) Necker, Lisa (Lucian) Stanescu, Amandah Necker; six great- grandchildren; his sister Emma Klaiber; and her children, Norbert (Linda) Klaiber and Hilma (Gerhard) Brost and their families. Those wishing to pay their respects may do so at McINNIS & HOLLOWAY (Chapel of the Bells, 2720 Centre Street North, Calgary, AB) on Thursday, September 3, 2015 from 6:30 to 8:30 p.m. Funeral Services will be held at the Bridgeland Campus of Centre Street Church (235-8A Street N.E. Calgary, AB) on Friday, September 4, 2015 at 12:00 p.m. Condolences may be forwarded through http://www.mcinnisandholloway.com www.mcinnisandholloway.com. In lieu of flowers, donations may be made to Centre Street Church for the Cuba Missions in memory of Albert Necker, Telephone: (403) 293-3900. In living memory of Albert Necker, a tree will be planted at Fish Creek Provincial Park by McINNIS & HOLLOWAY FUNERAL HOMES, Chapel of the Bells, 2720 CENTRE STREET NORTH, Calgary, AB, T2E 2V6, Telephone: 1-800-661-1599.