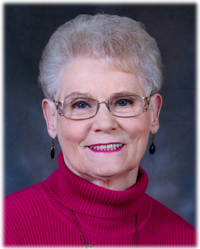 Mrs. Shirley Elizabeth Hart, beloved wife of David Hart, passed away at the Foothills Hospital in Calgary on Friday, September 4, 2015, at the age of 76 years. Shirley was born on August 5, 1939 in Leader, Saskatchewan. She attended primary school at the Hallewell School, ten miles south of Richmound, Sk. and graduated high school at St. Theresa’s Academy in Medicine Hat. Shirley married David on June 30, 1958 at St. Patrick’s Catholic Church, Medicine Hat. She worked as an assistant manager for K-Mart Food Services and loved baking, cooking, traveling throughout Canada and the USA with her husband and daughters, and was a long time member of the Loyal Order of Moose. Shirley enjoyed knitting, crewel embroidery, reading and was an avid watcher of daytime soap operas and curling on TV. She occasionally tried her luck at the penny slot machines at the casino as well as spending evenings with friends and playing cards. Shirley was a loving, caring person who was devoted to her family and her greatest achievements in life were her husband and their daughters. Shirley will be forever remembered by her husband, David; children, Terry (Don) Eftoda, Dixie Forester (Chris), and Cindy Packet (Willie Robertson); 8 grandchildren; 15 great-grandchildren; brother, Garry (Marion) Folk; aunt, Julia Hellman; brothers-in-law, Don (Fran) Hart and Bob (Marg) Hart, as well as numerous nieces and nephews. She was predeceased by her parents, Balzer and Frances Folk; brother, Killian Folk and sisters-in-law, Rita (Bill) Barnes and Norma Hart. Vigil Prayers will be recited at Cook Southland Funeral Chapel, 901 – 13 Street S.W., Medicine Hat on Wednesday, September 9, 2015, at 7:00 p.m. The Funeral Mass will be celebrated at Holy Family Parish, 1451 Strachan Road S.E., Medicine Hat on Thursday, September 10, 2015, at 1:00 p.m. with Reverend Father Philip Le celebrant. Interment will follow at Hillside Cemetery. (Condolences may be expressed by visiting our website at www.cooksouthland.com) In lieu of flowers, memorial donations in Shirley’s name may be made directly to the Heart & Stroke Foundation of Alberta, #124, 430 – 6th Ave. S.E., Medicine Hat, Alberta T1A 2S8. Honoured to serve the family is

One Condolence for “SHIRLEY HART”