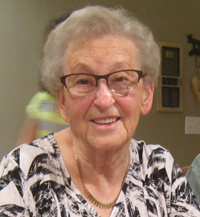 It is with great sadness that we announce the sudden passing of our beloved mother and grandmother (Oma) Else Kahle, age 81. She was taken into the arms of her Lord on Monday, August 31st, 2015 as a result of a terrible car accident.

Else was born on September 21st, 1933 in Wincentowo, Poland to Anna and Julius Müller, the fifth eldest of 10 siblings. Her family experienced the trials of the War and was forced to flee their homestead in West Prussia.

Else met the love of her life, Erich Kahle, in Oesingen, Germany and married April 22nd, 1957 in Hannover. In the aftermath of the war they were unable to find a home and make a life in Germany and decided to immigrate to Canada.

Oma and Opa (Else and Erich) arrived in Canada on September 16th, 1957 on the AROSA STAR ship in Montreal, then made their way across Canada by train to join her brother, Arthur, in Medicine Hat who had arrived 5 years earlier.

Cherishing her memory are her loving and faithful husband of 58 years, Erich Kahle; her two sons, Andy Kahle and Dave (Heather) Kahle; and her grandchildren whom she adored, Adam and Emily Kadey and Joshua, Elyssa and Matthew Kahle.

Else is predeceased by her daughter, Christina Kadey; her brother, Arthur; and sisters, Juliana and Lydia.

Also left to cherish her memory are her sisters, Emilie (Alwin) Laich of Medicine Hat, Gertrude (Gerhardt) Forchheim, Erna (Martin) Jendretzke, Emma (Kurt) Holmer; her brothers, Herbert (Marie) Müller and Johann (Ilse) Müller of Germany; and her Godchild, Elizabeth (Marcel) Bergmann; her niece, Esther (Vincent) Thane of Vancouver; and many other nieces and nephews in Canada and Germany.

Else loved the Lord Jesus with all her heart. She was a hardworking and wonderful wife, mother, loving Oma, sister, auntie and friend. She enjoyed cooking, gardening, cross-stitch, making her apple pancakes, walking with Opa in Kin Coulee, relaxing under a tree at Echo Dale Park and giving generously to those around her. Her greatest pleasure was a house full of family, enjoying a meal around the table.

Mom, we love you and we’ll be with you one day in Heaven – Ewig verbunden in Liebe.

The prayer service will be held on Saturday, September 19th, 2015 at 11:00 a.m. at St. Paul Lutheran Church, 515 Sprague Way SE, with a luncheon to follow. Family is invited to the graveside following the luncheon.

We regret to share that Opa remains in serious condition at the Royal Inland Hospital in Kamloops and will not be able to attend the prayer service. At a later time, we are planning a funeral service for Else in Medicine Hat that Erich can attend.

In lieu of flowers, we ask that memorial donations be made to The Lutheran Hour (http://www.lutheranhour.org), Concordia Lutheran Mission Society (http://www.concordiamissions.org), or a charity of your choice.

Thank you to all our family and friends for all your loving prayers and support.

Condolences may be expressed through www.saamis.com or to condolences@saamis.com subject heading Else Kahle. Funeral arrangements are entrusted to