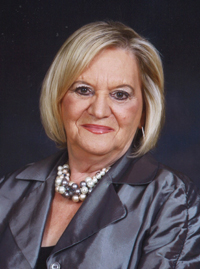 Sharon Greenwood, beloved wife of James Greenwood of Medicine Hat, passed away on Sunday, September 13th, 2015 at the age of 75 years. Sharon also leaves to cherish her memory three children, Kim Miller, Shawn (Kelly) Torresan, and Daryn Miller; five grandchildren, Jeffrey (Zoriana) Fry, Kaylee Miller, Ayden Miller, Brendan Torresan, and Jessica Torresan; two great-grandchildren, Abbigail and Callum; one brother, Wayne (Toni) Johnson; one sister, Beverly (Charles) MacKenzie; as well as Jim’s family. Sharon was predeceased by her parents, Stanley and Phyllis Johnson; two grandchildren, Genevieve Allford and Matthew Torresan; her first husband, Norman Miller and her second husband, George Scherger. Sharon was born and raised in Medicine Hat, the oldest child of Stan and Phyllis Johnson, and sister to Wayne and Beverly. As a young girl, she loved to look her best and was very social. She met her husband, Norm, and together they had three children. Sharon spent her adult years raising her family and working at the Hudson’s Bay in the Cosmetics Department. She loved to travel, her favourite destination being Hawaii. The most important part of her life was her family, her faith and her church family. The family would like to thank the doctors, nurses and staff of Palliative Care at the Medicine Hat Regional Hospital and at Carmel Hospice, St. Joseph’s Home for the love and care she received. Those wishing to pay their respects may do so at SAAMIS MEMORIAL FUNERAL CHAPEL, 1 Dunmore Road SE, on Friday from 7:00 to 9:00 p.m. The Funeral Service will be held at CHRIST THE KING ASSEMBLY, 1101 Queen Street SE, on Saturday, September 19th, 2015 at 1:00 p.m. with Pastor Mark Borrows officiating. A Private Interment will take place at Hillside Cemetery. Memorial gifts in Sharon’s memory may be made to Christ The King Oasis Cafe Food Cupboard, 1101 Queen Street SE, Medicine Hat, Alberta, T1A 1B3. Condolences may be sent through www.saamis.com or to condolences@saamis.com subject heading Sharon Greenwood. Funeral arrangements are entrusted to