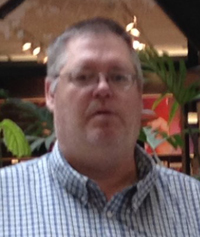 Sidney “Sid” Allen Janzen, beloved husband of Lynn Kienas of Redcliff, passed away on Saturday, September 19th, 2015 at the age of 55 years. Sid also leaves to cherish his memory eight children, David Janzen, Shari Janzen, Michelle Janzen, Jarrett Janzen, Michael Boille, Kyle Boille, Ryan Boille (Erica) and Leslie-Anne (Chris) Donaldson; five grandchildren; his mother, Elfrieda; one brother, Bevin Janzen (Kim Todd); and two sisters, Phyllis (Rick) Bettig and Loretta (Warren) Nelson. Sid was predeceased by his father, Leslie. Sid was born on New Year’s Day in Morris, Manitoba where he was raised and educated. He married Karen and they had 3 children together. After his divorce in 2001, Sid concentrated on his work. He met Lynn Kienas and welcomed their children into the world in 2003 with the birth of Jarrett. Sid enjoyed spending time with his step-children during summer vacations and anything NASCAR. Those wishing to pay their respects may do so at SAAMIS MEMORIAL FUNERAL CHAPEL, 1 Dunmore Road SE, on Tuesday, September 22nd, 2015 from 7:00 until 9:00 p.m. A Memorial Service will be held in Manitoba at a later date. Memorial gifts in Sid’s memory may be made to a Trust Fund for his son, Jarrett Janzen, at the TD Bank, 1311 Southview Drive SE, Medicine Hat. Condolences may be sent through www.saamis.com or to condolences@saamis.com subject heading Sid Janzen. Funeral arrangements are entrusted to