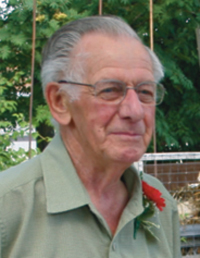 September 04, 1924 – Sep 17, 2015
Gerrit Haagsma, late of Medicine Hat, passed away in Edmonton on September 17, 2015 at the age of 91 years. Born in Harlingen, the Netherlands, he immigrated to Canada with his wife Gerry in 1949. He loved music, playing the trumpet, the piano and organ in a variety of orchestras and bands, including the German-Canadian Harmony Club Band and the Elks Club Band. In his later years he authored a personal account of his wartime adventures in “A Bumpy Ride Through World War II”. Gerrit is survived by his wife Gerry, children Joan (Terry) Allison, Robert, Diane Haagsma and Marvin (Jopy); seven grandchildren and two great-grandchildren. Funeral: 2:00 PM on Thursday, 24 Sep 2015 at West End Christian Reformed Church, 10015 149 St NW, Edmonton, AB, Edmonton.

One Condolence for “GERRIT HAAGSMA”