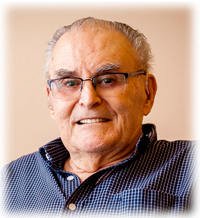 Maurice Bernadet passed away peacefully at the Medicine Hat Regional Hospital on Friday, September 18, 2015, just short of his 87th birthday and his 60th wedding anniversary. Maurice was born in Eastend, Saskatchewan on October 5, 1928, to Jules and Marie Bernadet. He grew up in a simple, unpainted farm house outside of Dollard with his sisters, Henriette (Bernie) and Jeanette. As a young man he ventured on his Harley Davidson motorcycle to work as a coal miner, an underground gold miner and a lighthouse keeper. In Vancouver in 1955, he married Margaret Louise Appell who would become his close and lifelong companion. Together they raised their family on a farm near Dollard. Maurice was a progressive farmer being one of the first in the area to use fertilizers and minimal tillage. He was innovative in both modifying and building much of his own farm machinery. While continuing to farm, the family made Shaunavon home in 1977, where they were part of the community and church for several decades. After many years of hard work, Maurice retired the farm at the age of 76. Maurice and Margaret later moved to Medicine Hat in 2014, to be near family and they were welcomed into the community of South Country Village. Maurice’s legacy is that he had an open heart and an open home, becoming “Dad”, “Papa” or “Grandpa” to many people when they needed a father. He was a quiet man that could speak volumes. He was loved. Maurice is survived by his wife, Margaret Bernadet; son, Craig Bernadet and grandsons, Brandon and Kenton; son, Mark (Myja) Bernadet and grandchildren, Nathan, Danielle and Caleb and great-granddaughter, Emilee Hutchinson; daughter, Cheryl Bernadet and granddaughter, Kyla (Jonathon) Toher and great-grandchildren, Blake and Keira and grandson, Kevin Bernadet; daughter, Leanne Berg with husband Burke Suidan and granddaughter Megan Berg; and younger sister, Jeanette Baxter of Victoria. He was predeceased by his parents, his older sister Bernie, and his loving daughter-in-law, Penny Bernadet. The Funeral Service will be held in the Wuerfel Auditorium, South Country Village, 1720 Bell Street S.W., Medicine Hat on Thursday, September 24, 2015, at 2:00 p.m. with Pastor Bob Findley officiating. The luncheon will take place in the Heritage Room of South Country Village immediately following the funeral service. Private family interment will take place later in the afternoon at Hillside Cemetery. (Condolences may be expressed by visiting our website at www.cooksouth land.com) If friends so desire, tributes in memory of Maurice may be made directly to the Arthritis Society, 200, 1301 – 8 Street S.W., Calgary, Alberta. T2R 1B7. Honoured to serve the family is