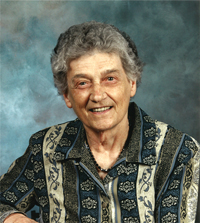 Hilda Schimpf of Medicine Hat, beloved wife of the late Harold Schimpf, passed away on Monday, September 21st, 2015 at the age of 91 years. Hilda leaves to cherish her memory her three children, Dwight Schimpf (Lauranne Lepine), Elaine (Dale Glasier) Hausauer and Larry Schimpf; six grandchildren, Nola, Chris (Sheri), Brad (Shawn), Tammy (Dallas), Ryan (Lina) and Kaitlyn; eight great-grandchildren; one brother, Edgar (Olga) Hofer; one sister, Erna Stern; as well as numerous nieces and nephews. Hilda was predeceased by her husband, Harold; her parents, Jacob and Magdalena Hofer; one grandson, Nathan Schimpf; and one brother, Jake Hofer. Hilda was born in Neudorf, Russia on February 2nd, 1924 and was raised in Burstall, Saskatchewan. She married Harold Schimpf on October 25th, 1947 and they farmed in the Estuary and Burstall areas until 1958 when they relocated to the Medicine Hat area. Hilda and Harold continued to farm until 1995 and then moved into Medicine Hat to retire. Hilda was an active member and volunteer at Memorial Evangelical Church for 46 years. She enjoyed gardening, sewing, and cooking. The Funeral Service will be held at SAAMIS MEMORIAL FUNERAL CHAPEL, #1 Dunmore Road SE, on Monday, September 28th, 2015 at 2:00 p.m. with Gary W. Goran officiating. A Private Interment will take place at Saamis Prairie View Cemetery. Memorial gifts in Hilda’s memory may be made to the Good Samaritan Society, 550 Spruce Way SE, Medicine Hat, Alberta, T1B 4P1, or to the Alzheimer’s Society, 547 – 4th Street SE, Medicine Hat, Alberta, T1A 0K7. Condolences may be sent through www.saamis.com or to condolences@saamis.com subject heading Hilda Schimpf. Funeral arrangements are entrusted to