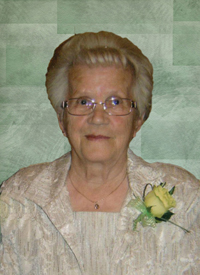 Mildred Alberta Bell was born on the farm in the Blue Fox District on November 12th, 1932 to Franklin and Jenny Bell. She was the second youngest of ten children. Mildred took her schooling in Blue Fox prior to attending school in Nipawin, Saskatchewan. In 1951, she met and married Victor Rommel. They settled on the farm in the Spooner District where they raised six sons. In 1977, she moved to the farm in Empress where she met Joe Stenger. In 1978, Mildred married Joe and became step-mother to his six sons, becoming instrumental in the farming operation. Mildred was an excellent cook, best known for her cabbage buns. Other activities that she enjoyed were knitting, crosswords, ceramic painting and doll collecting. The decision was made by Mildred and Joe to retire in 1996 and to move to Medicine Hat where they resided until her passing. Mildred was predeceased by her parents, Franklin and Jenny Bell; an infant sister, Sadie Pearl; her sisters, Ina Bell, Ada Bell, Irene Mogge and Rita Watson; her brothers, Garriet Bell, James Bell and Orville Bell; and a step-son, Neil Stenger. Left to treasure her memory are her husband, Joe; her sister, Alice Brake; her sons, Allan (Gloria), Dennis (Lorna), Daniel, Douglas, Eldred (Eileen) and Patrick; step-sons, Lyle (Yvonne), Tom (Kim), Clifford, Leonard (Cindy) and Brad (Cheryl); and numerous grandchildren and great-grandchildren.

The Funeral Service will be held at SAAMIS MEMORIAL FUNERAL CHAPEL, #1 Dunmore Road S.E., on Saturday, September 26th, 2015 at 1:30 p.m. with Gary W. Goran officiating. Memorial gifts in Mildred’s memory may be made to Kidney Foundation of Canada, 6007 – 1A Street SW, Calgary, Alberta, T2H 0G5, or to the Canadian Diabetes Association, 102, 73 – 7th Street SE, Medicine Hat, Alberta, T1A 1J2. Condolences may be sent through www.saamis.com or to condolences@saamis.com subject heading Mildred Stenger. Funeral arrangements are entrusted to