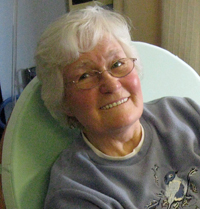 Alwyn Anderson of Medicine Hat, beloved wife of the late Floyd Anderson, passed away peacefully on Friday, September 25th, 2015 at the age of 75 years.

Alwyn was born and raised on a farm in Great Harwood, Lancashire, England. A wise woman, she was trained as a midwife and nurse and became a Registered Nurse in 1961. In 1966 she moved to Edmonton to marry Floyd on December 29th. After brief periods in Calgary and Suffield, they settled in Medicine Hat in 1973.

She began work as a nurse at the Medicine Hat Regional Hospital in 1972 and became the Chief Stork in 1977 (Head Nurse and subsequently Manager of Labour and Delivery), a position she held until her retirement in 2000. She was a well respected nurse with a sense of humour who was well known for her wands, hats and ability to accurately predict the weight, sex and date of birth of babies. Alwyn was diagnosed with breast cancer in 1992 and has since worked as an advocate, activist and supporter for other women coping with cancer locally, nationally and internationally. She was involved in the Canadian Breast Cancer Network, the Breast Cancer Survivors’ Network and the local group Life After Breast Cancer.

Always active, Alwyn was an avid hiker in her youth through to her involvement with the Tough Old Birds (TOBs), a hiking group for women over 50. She enjoyed walking, biking and she participated as a member of a local Dragonboat team and also paddled on a team composed entirely of breast cancer survivors. She practiced Tai Chi for decades and enjoyed tea and banter with her close Tai Chi friends on Saturdays. Alwyn was active in Toastmasters, and particularly enjoyed composing humorous speeches. More recently she was involved with PEO (Philanthropic Educational Organization), a group focused on advancing education for women. She loved a good cup of tea and had many varieties of tea close at hand. Alwyn also loved good food and enjoyed cooking different cuisines. A creative and fun granny, she loved dressing up and playing with her grandchildren. She was a strong, kind, generous, compassionate woman who was inclusive of everyone and was a mentor to many.

Alwyn leaves to cherish her memory her sons, Patrick (Amelia Correia) and their two children, Sophia and Lucas, and Scott; her sisters, Marie Wilson and Joan Simpson in the UK, Cynthia (Ian) Millar in the USA; her brothers, Hedley (Alice) Pickard, Duncan (Barbara) Pickard, and John (Peggy) Pickard, all in the UK; her close niece, Helen Simpson; as well as numerous nieces and nephews. Alwyn was predeceased by her parents, Thomas and Elsie; her sister, Glenys (Raymond) Clough; her brother, Gordon Pickard; and her brothers-in-law, Arthur Wilson and James Simpson.

The Funeral Service will be held at ST. JOHN’S PRESBYTERIAN CHURCH, 504 – 2nd Street SE, on Friday, October 2nd, 2015 at 1:30 p.m. with Reverend Dr. Nancy Cocks officiating. We would like to make you aware of the construction on 2nd Street SE around St. John’s Presbyterian Church creating restricted parking.

Condolences may be sent through www.saamis.com or to condolences@saamis.com subject heading Alwyn Anderson. Funeral arrangements are entrusted to