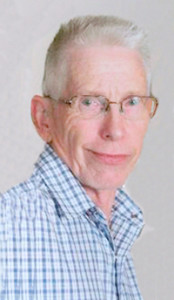 Bill was born on August 3, 1942 to George and Leona Thompson of Bow Island and entered into the loving arms of his Savior on September 24, 2015. Bill is survived by his wife of 52 years – Carol (Sweet). He also leaves to cherish his memory three children Carla (Shawn Jackson) of Vancouver, Aaron (Terry) of Kelowna, Willy (Tania) of Chestermere; six grandchildren Dan Vander Heiden, Sara (Jesse) Andreas, Dakota Thompson, Shelby Thompson, Kacy Thompson and Jared Thompson and one great grandson Cole Andreas; one brother Don Thompson and sisters Doris Bolig, Cindy Pearson and Sue (Mike) Williams as well as numerous bothers-in-law, sisters-in-law, nieces and nephews. Bill was predeceased by his parents, brothers Bob Thompson, Charles Thompson, sister Sandy Wilson, niece Lisa Wilson, brothers-in-law Bernard Bolig and Bill Pearson. For the past 20+ years he has given selflessly and passionately to his Parkinson’s support group friends and family with both a positive attitude and tireless effort. Bill was always helping his many relatives, friends and neighbors with his acts of his kindness and love. He will be deeply missed by all. Family and friends who wish to pay their respects may do so at the PATTISON FUNERAL HOME on Wednesday evening from 6:00 – 8:00 p.m. and on Thursday from 12 noon – 12:55 p.m. The funeral service will be held in the PATTISON CHAPEL on Thursday, October 1, 2015 at 1:00 p.m. with Rev. Glen Dueck officiating. Interment will follow in the Hillside Cemetery. In lieu of flowers, as an expression of sympathy, donations may be made to the Parkinson Society of Southern Alberta, #101, 928 Allowance Ave SE, Medicine Hat, AB T1A 3G7. To e-mail an expression of sympathy, please direct it to: pattfh@telusplanet.net subject heading: Bill Thompson, or you may visit www.pattisonfuneralhome.com and leave a message of condolence.