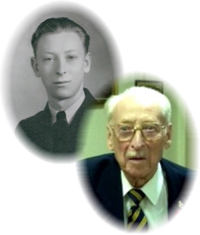 Longtime Redcliff resident, Red Newnham, passed away peacefully at Carmel Hospice on Saturday morning, in the company of his loving friends, Garry and Hazel Willis. Red was predeceased by his parents, Charlie and Olive Newnham; brother, Ken; brothers and sisters-in-law, Gordon (Myrtle) and Ed (Huei Mei); and his companion of over 50 years, Rose Keats. He will be deeply missed by his niece, Janice (Jay) Carton of Red Deer; nephew, Ken (Betty) Newnham of Winnipeg and their sons Tom and Ben; and Godson, Garry (Hazel) Willis of Redcliff.

Red lived his entire life in the modest Redcliff home in which he was born and raised, the only notable exception being his time away for wartime service. He enlisted in the RCAF soon after turning 18 and by age 19 was flying operationally over occupied Europe as tail gunner on a Halifax bomber with 427 (Lion) Squadron, based in Leeming, Yorkshire. Red had a deep affection for the Halifax, in particular his crew’s aircraft Q for Queenie. He often commented that Queenie never failed to bring him home safely from places he didn’t really want to go to in the first place. He thought it quite unfair that the Lancaster grabbed all the glory, while the Halifax did most of the hard work.

Upon completing his tour of 30 operational missions, Red returned to Canada on leave and was demobilized here when hostilities ceased. He initially found work in the Redcliff Glass Factory, then joined the staff at the Suffield Experimental Station in 1950, working there until his retirement in 1985. Red was a staunch supporter and Past President, Past Officer, 1st Vice President, Executive Committee, and Sergeant-At-Arms of the Redcliff Royal Canadian Legion Branch #6, and a faithful member of the congregation of St. Ambrose Anglican Church.

Family and friends were everything to Red, and he had plenty of the latter. A true gentleman, thoughtful and considerate, he was a wonderful storyteller and an even more skillful flirt. His ready smile, quick wit and dry sense of humour will be remembered and cherished by all who knew him.

Red’s funeral service will be held at SAAMIS MEMORIAL FUNERAL CHAPEL, #1 Dunmore Road SE, at 1:00 p.m. on Friday, October 2nd, 2015, officiated by Dr. David Carter. Interment will follow in the Family Plot in Redcliff Cemetery. In lieu of flowers, memorial gifts in Red’s memory may be made to the Redcliff Royal Canadian Legion Branch #6, 302 Broadway Avenue East, Redcliff, Alberta, T0J 2P0, or to the Carmel Hospice at St Joseph’s Home, 156 – 3rd Street NE, Medicine Hat, Alberta, T1A 5M1, or to the charity of your choice.

At this time, the family extends their heartfelt thanks to Garry and Hazel Willis for the truly remarkable friendship and care they extended to Red over many years. Our thanks as well to the nurses and staff of Medicine Hat Home Care, The Palliative Nurses, and the staff at Carmel Hospice for their thoughtfulness and compassion during Red’s brief time with them. He could not have been in better hands.

I will travel empty-handed.
There is not a single thing
I have collected in my life
That I would ever want to bring except…
The love of those who loved me
And the warmth of those who cared.
The happiness and memories
And the magic that we shared.
“The Next Place” ~ Warren Hanson

Funeral arrangements are entrusted to
SAAMIS MEMORIAL FUNERAL CHAPEL CREMATORIUM & RECEPTION CENTRE, “The Chapel in the Park”, locally owned and directed. Should you wish any additional information, please telephone (403)528-2599