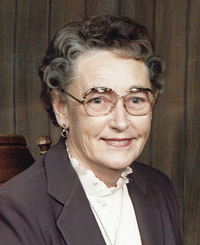 Millie completed her life’s journey in Penticton on September 29, 2015 at the age of 95. She spent her early years in Alberta where she trained and worked as a teacher and met and married Harry. They moved to BC in 1946, settling on T6 Ranch outside of Penticton in 1953. From ranching to auctioneering in Kelowna, Millie then returned to Penticton in 1980. She settled in Athens Creek Retirement Home when it first opened in 1997 and lived well there. She was predeceased by sister, Ruby (Sis) Morrison; husband, Harry and great friend, Jack Elliott. She bid goodbye to son, Lynn (Connie); daughter, Janet (Dennis); grandsons, Chad and Ryon (Narel) Kusler; granddaughters, Janice (Maynard) Angus and Annelise Kusler Iversen and 5 great grandchildren, Rylin, Seanna and Kailie Kusler and Leland and Madeline Angus. No service at her request. Cremation. Condolences may be shared by visiting www.everdenrust.com

In Memorium
Grieve not for me
Nor mourn the while,
For happier would I be
To see you smile.
Let no tears fall
Since I have passed away,
But miss me and
Remember me each day.
Live you your lives
As I would want you to,
And treat thy fellowman
As I would do.
And when the time has come,
Your lives be through,
I shall be waiting here
For each of you.