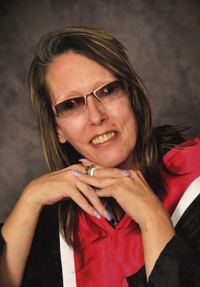 Twila Dawn Buckley, passed away in Medicine Hat on Tuesday, September 29, 2015 at the age of 48 years.

The Service will be held at the Foremost Community Hall, 802 – 1 Avenue West, Foremost on Tuesday, October 6, 2015 at 2:00 P.M. Condolences may be forwarded by visiting our website at www.southlandfuneral.com.

Twila was born in Calgary on June 8, 1967. She and her brother Lynden were raised in Vauxhall by Dora and Bud Kinzell. Twila resided in Foremost with her partner Jack Hammond until the time of her passing. She will be dearly missed by her family and friends.

If friends so desire, memorial tributes in Twila’s name may be made directly to the Lethbridge & District Humane Society, 2920 – 16 Avenue North, Lethbridge, Alberta T1H 5E9 (www.lethbridgehumanesociety.com).