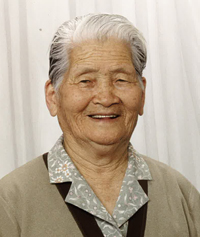 Chool Lie Kim of Medicine Hat, beloved wife of the late Jin Gu Yu, passed away on Wednesday, September 30th, 2015 at the age of 97 years. Chool Lie leaves to cherish her memory her daughter, Mary (Chuck) Park; two grandchildren, Monika (Tyrone) Wessner and their children, Emily and Benjamin, and Augustine (Tania) Park and their children, Mackenzie and Zackary; and one brother. Chool Lie was born in Taegu, South Korea on December 7th, 1917. She immigrated to Canada in order to live with her daughter. In 1991, Chool Lie and her family moved to Medicine Hat and she loved to help her family any way she could in operating the Park Lane Hotel. She will always be remembered for her friendliness, concern and kindness. Her family meant everything to her and she especially enjoyed watching her grandchildren, and now her great- grandchildren, grow and now her great-grandchildren. Chool Lie will be sadly missed by everyone who had the good fortune to know her. Those wishing to pay their respects may do so at SAAMIS MEMORIAL FUNERAL CHAPEL, #1 Dunmore Road SE, on Friday from 6:00 until 6:55 p.m. and at ST. PATRICK’S ROMAN CATHOLIC CHURCH, 238 – 2nd Avenue NE, on Saturday from 12:30 until 1:25 p.m. Vigil Rites (Prayers) will be held at SAAMIS MEMORIAL FUNERAL CHAPEL on Friday, October 9th, 2015 at 7:00 p.m. The Funeral Mass will be celebrated at ST. PATRICK’S ROMAN CATHOLIC CHURCH on Saturday, October 10th, 2015 at 1:30 p.m. with Father Francis Tran, celebrant. Interment will follow at Saamis Prairie View Cemetery. Condolences may be sent through www.saamis.com or to condolences@saamis.com subject heading Chool Lie Kim. Funeral arrangements are entrusted to