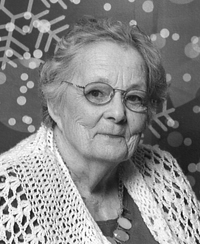 On October 5, 2015 our beloved sister, mother, grandmother, great-grandmother, aunt and friend, Flora Grace Deering, passed away peacefully in Bethany Collegeside at the age of 93 years.

Flora was born in Delia on May 3, 1922 to Henry (born in Wishaw, Scotland 1878) and Caroline Emily Nimmo (nee Robinson, born in Digby, Nova Scotia 1894). She was one of ten children (five brothers and four sisters) raised during the depression years on the family farm about 12 miles from Delia. Flora completed her normal school training and taught at the Brookfield one-room school for several years. She met Bill Deering while she was boarding at Gus and Margaret Deering’s. Flora and Bill married August 7, 1948 and they raised five children on farms in the Hillsdown and Joffre area.

Flora enjoyed cooking, baking and gardening. She was famous for her chicken and dumplings as well as other homemade goodies such as bread and cinnamon buns. She loved her children, grandchildren and great-grandchildren. In her later years, she enjoyed growing flowers and attending Rose Bud Theatre with Laura Deering. Flora moved to Bethany Collegeside in November 2006 and was baptized by Rev. Peter Van Katwyk in August of 2011. Although her memory faded and she no longer recognized family members, she enjoyed the companionship of other residents and liked to reminisce about her younger years with her brothers and sisters. One of her greatest pleasures was to attend church services and sing along joyfully to the hymns. Flora was blessed with many wonderful caregivers including pastoral care (Mabel and Dave) and was well cared for in her last years by Dr. Hovan and the staff at Bethany Collegeside.

A Funeral Service will be held at Mount Calvary Lutheran Church, 18 Selkirk Blvd, Red Deer, on Wednesday, October 14, 2015 at 1:00 p.m. In lieu of flowers, donations may be made to a charity of your choice.