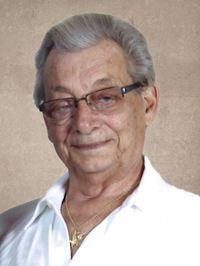 Gary George Barnes, beloved soul mate and partner of Marcille McBain, passed away on Thursday, October 15th, 2015 after a lengthy and courageous battle with COPD at the age of 74 years. Gary was born in Toronto, Ontario on July 21st, 1941 and was raised and lived in various locations including Empress, Lethbridge, Hay River, NWT, and Medicine Hat. He was active in sports all his life – baseball, hockey, cross-country running, and his real passion, golf. Gary started working in the hospitality industry as a bell hop, desk clerk and lounge manager before moving on to 17 years with CHAT Radio as account executive where he obtained membership in the “5,000,000 Club”. A break from the media industry took him to Manager and Club Pro at the New Last Hill Golf and Country Club at Eckville, Alberta; Manager of the Medicine Hat Elks Club; Manager of Connaught Golf Club and Clubhouse. He then returned to Monarch Cable TV and CHAT TV as account executive for 13 years. As a 40-year member of Connaught Golf Club, Gary served for 15 years on the Board of Directors as Club Captain and Tournament Chairman; Director of Clubhouse and Grounds; First and Second Vice Presidents; and as President for three years from 1981 – 1983. Gary was predeceased by his parents, Margaret and Bud Barnes; and his only child Terri-Lynn and her mother, Cheryil. Gary is survived by Terri-Lynn’s children, Brad and Carmen and Carmen’s daughter, Sakkara; his brother, Wayne (Elaine) and their daughters, Karen (Kelly) Olechowski and children, Grayson and Kate, and Lori-Jo Barnes and daughter, Spencer. He is also survived by Marcille’s children, Michelle (Darrel) Hauck and their son, Juston, and David (Rhonda) McBain and their daughter, Shaelyn. Gary will also be missed and remembered fondly by his extended families, Gordon and Sherry Nott, Gene (Starla) Heather, and Jill Heather. At Gary’s request, a Private Funeral Service will be held at SAAMIS MEMORIAL FUNERAL CHAPEL, #1 Dunmore Road SE, on Tuesday, October 20th, 2015 with Reverend Guy Snell officiating. Interment will take place at Hillside Cemetery. Memorial gifts in Gary’s memory may be made to the Alberta Lung Association, P.O. Box 4700, Station South, Edmonton, Alberta, T6E 9Z9, or to the Canadian Cancer Society, 102 – 1865 Dunmore Road SE, Medicine Hat, Alberta, T1A 1Z8. Condolences may be sent through www.saamis.com or to condolences@saamis.com subject heading Gary Barnes. Funeral arrangements are entrusted to