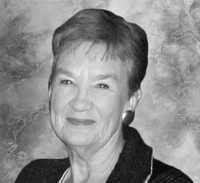 She was a lady of many talents and interests with a very keen intellect. All self taught were Yoga, which she taught, French, painting, licensed insurance agent, and accountant while at the same time she was a fantastic mother, wife and GG. Her recreation time was spent with the Newcomers Club, Newgrads Club of which she was President, Friends of Fish Creek and her bridge group the “Cartier Bridge Club”. Between Newcomers Club and the bridge club she made most of her closest and dearest friends.

Gail was well ahead of her time when it came to health, nutrition and the environment. Her granddaughter writes that her fifth child was mother earth. And for all that new her well, they will remember Gail’s wicked sense of humour. Also Gail was a voracious reader and champion crossword puzzler.

The family would like to thank all of our friends and care givers during Gail’s health journey, in particular Dr. Peter Duggan and nurse Karen of the Tom Baker Cancer Centre as well as Pharmacists Patrick and Noreen.

Gail is survived by four children, Dawn(Ken Kadoski) Bud(Kathy Robinson), Denise (Peter Gauthier), Bobbi (Mike Marthold) as well as six grandchildren and four great grandchildren. She is also lovingly remembered by her two sisters Irene Hunter of Phoenix, AZ and Bea Nelson of Red Deer, AB and her cousin Sandra Darlington of Calgary. Gail was predeceased by her parents Robert and Ava Holt of Medicine Hat.

One Condolence for “KLASKY, Gail Sarah”