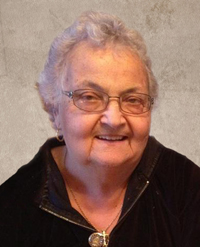 Silvana Dalla Longa, beloved wife of Damiano Dalla Longa of Medicine Hat, passed away on Tuesday, October 20th, 2015 at the age of 75 years. Silvana also leaves to cherish her memory her daughters, Anna (Tim) Schottner and Rosa (Tracy) Zubrecki; three grandchildren, Zachary Zubrecki, Mikala Zubrecki and Francesca Schottner; one brother, Paolo (Varna) Ciannavei; special sister-in-law, Luciana Ciannavei; numerous sisters-in-law, brothers-in-law, nieces and nephews. Silvana was predeceased by her parents, Ermanno and Angelina; and one brother, Adriano Ciannavei. Today, another angel entered Heaven. Silvana Dalla Longa, our angel on earth, was quickly taken to be with Jesus our Lord. She was born in Asmara, Ethiopia on July 17th, 1940 to two wonderful parents Ermanno and Angelina Ciannavei. They loved her dearly along with her brothers, Paolo (in Italy) and Adriano (predeceased in 2007). She and her family returned to Italy in 1950 where she met the love of her life, Damiano, in 1957. They had a very special courtship, and in 1961, mom immigrated to Canada where they were married on September 23rd, 1961. They were soon blessed with two wonderful daughters, Anna and Rosa. As the years passed, they welcomed their two son-in-law’s, Tim Schottner and Tracy Zubrecki. Mom was an awesome Italian cook, and shared her culinary talents with the residents of St. Joseph’s Home for the Aged. Upon her retirement in 1993, the residents and Sisters wanted to keep her with them, she was deeply missed for years! However, her first grandchild Zachary Zubrecki was born and became her number one priority. They were inseparable and to this day both share a very special bond. This bond carried on with the birth of Zachary’s sister, Mikala and cousin, Francesca. Mikala and Francesca were mom’s “twins” and she showered all three grandchildren with never-ending love and affection. Mom and dad were dedicated to their children and grandchildren, and followed them to all of their activities. Along the way they made friends at the hockey arena, soccer field and baseball diamond as proud supporters of their grandchildren’s sports involvement. These friendships continue today and all remember our mom as being the sweetest, kindest person ever. “Family is everything” is mom and dad’s motto. They lived for their children and grandchildren, she along with dad lived life to the fullest each day. She was always busy whether she was at their Elkwater cabin or at home in the garden or kitchen. She loved flowers and her garden was beautiful. Every year she and dad planted such an amazing vegetable and flower garden. The Paramedic even commented on her marigolds. Whenever mom would meet someone, they were greeted with a warm smile and a welcoming hug. She was always kind and caring to everyone she met. She was adored by all, especially her family. She was a “mamma d’oro.” Those wishing to pay their respects may do so at SAAMIS MEMORIAL FUNERAL CHAPEL, #1 Dunmore Road SE, on Sunday from 6:00 to 9:00 p.m. Vigil Rites (Prayers) will be said at SAAMIS MEMORIAL FUNERAL CHAPEL on Sunday, October 25th, 2015 at 7:00 p.m. The Funeral Mass will be celebrated at ST. PATRICK’S ROMAN CATHOLIC CHURCH, 238 – 2nd Avenue NE, on Monday, October 26th, 2015 at 10:30 a.m. with Father Tomy Manjaly and Father Francis Tran, co-celebrant. Memorial gifts in Silvana’s memory may be made to The Lung Association, Alberta/NWT Division, P.O. Box 4700, Station South, Edmonton, Alberta, T6E 9Z9. Condolences may be sent to condolences@saamis.com subject heading Silvana Dalla Longa. Funeral arrangements are entrusted to