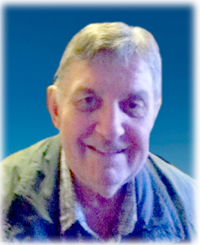 Bill Ukalchuk, beloved husband of the late Ardyth Ukalchuk, passed away at the Medicine Hat Regional Hospital on Saturday, October 17, 2015, at the age of 80 years. Bill leaves to cherish his memory: three children, Jeff Ukalchuk of Cranbrook, B.C., Jodi (Kodie) Nelson of Calgary, AB., and Jason (Gail) Ukalchuk of Dunmore, AB.; grandchildren, Kodie Ukalchuk and Levi (Tiffany) Nelson, Brooke Nelson (Colton Van Rijin), Chelsea Nelson, Charlee Ukalchuk; great-granddaughter, Kaitlyn Nelson; sister, Beth Anaka; sister-in-law, Carol Milroy as well as numerous nieces, nephews and friends. Bill was predeceased by his parents, Terenti and Katherine; wife, Ardyth as well as two brothers-in-law, Jack and Eugene. Bill was born in Stenen, SK., in 1935, where he grew up with his father who ran a shoe making shop. He managed the McLeod’s store for 25 years in Swan River, MB., before transferring to Medicine Hat. Bill then began work in the carpet industry with Kulpe Carpets, eventually retiring with Main Floor Carpets. He had an exceptional interest in curling, flowers and gardening as well as a true love for dogs. Bill was exceptionally proud of all his grandchildren and enjoyed watching them at their sports of hockey, soccer, football and figure skating. He could often be heard boasting about their accomplishments and will be ever remembered and forever loved. A celebration of Bill’s life will be scheduled in the Spring of 2016. (Condolences may be expressed by visiting www.cooksouthland.com) If friends so desire, memorial donations in Bill’s name may be made to the SPCA, 55 Southwest Drive S.W., Medicine Hat, Alberta, T1A 8E8. Honoured to serve the family is

One Condolence for “WILLIAM UKALCHUK”