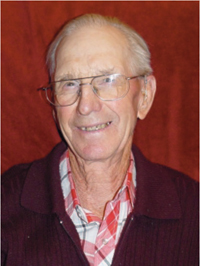 Kenneth David Booker, beloved husband of Margaret Booker peacefully passed away Friday, Oct. 23, 2015. Ken was born on March 24, 1922, in the Empress Cottage Hospital, the oldest son to Robert and Nora Booker. He got his start in farming helping on his Dad’s farm and gradually acquired his own land. Ken and Margaret were married on October 12, 1946 and raised their six children. Ken was a hard worker and helped with harvest driving his favorite “White” combine at the age of 89. He truly believed it was the responsibility of a farmer to help feed the nation. Ken was a leader for 4-H and Cubs and Scouts. He served as chair of the Empress Credit Union Board as well as the Empress Hospital Board. He and Margaret were founding members of the Empress Friendship Centre. Ken enjoyed fishing, hunting, stick curling, baseball and hiking. He was an avid reader of true stories of early explorers, ranching and nature. Ken also loved music. He played guitar, piano and harmonicas. He taught himself to play the mandolin in his mid-80’s. Ken’s devotion to his Lord and Saviour was the highest priority of his life. He gave his heart to the Lord at age 16 and continued faithfully serving him all the days of his life. To all who met him, Ken’s sweet, kind, gentle, caring , loving and compassionate spirit will always remain dear in their hearts. Ken moved to the Oyen Long Term Care in June 2012 where he was lovingly cared for by all staff until his passing. Ken was predeceased by his parents, Robert and Nora, two infant daughter, Susan and Marlene,grandson, Mark, and brother Bob(Velma)Booker. He will lovingly be remembered by his wife Margaret, children Shirley(Ben)Kofoed, David(Maureen)Booker, Rick(Arlene)Booker, Elaine Booker-Leach, Vicki(Phil)Amundson, Ken(Maxine)Booker, fourteen grandchildren and twenty great-grandchildren. Memorial tributes may be made to Global Missions Box 934 North Battleford, SK, S9A 2Z3, or Operation Smile Canada Box 235 Stn Main, Markham, ON L3P 3J7. Funeral will be held on Thursday, Oct. 29 at 1:00 in the Empress Community Hall. Funeral arrangements entrusted to Maclean’s Funeral Home, Oyen, AB.

One Condolence for “KENNETH D BOOKER”