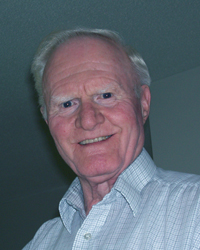 Cy Payne was born in Calgary, Alberta to parents, Charles Ernest and Faith Payne. He spent his early years in Calgary, growing up with older brother, Peter (deceased 1995) and younger siblings, Edward (deceased 2009) and Gladys. After graduating from Crescent Heights High School in Calgary he worked for the gas company and attended business college. In 1948 he began a three and a half decade long career with Alberta Government Telephones. Cy lived most of his working life in Calgary, but also lived in Lethbridge, Red Deer, and in Medicine Hat where he returned to retire. In 1963 he married a nurse from Liverpool, England, Margaret Mary Clarke, whom he had met while in hospital. Subsequent years saw the birth of two boys, Charles and Shawn. Grandchildren came along in his mid- seventies, and Cy could often be found down on all fours playing with his young grandson and granddaughter. Cyril was a quiet, kind, and thoughtful man, who had great affinity with children, and with all people down on their luck. He loved his family, and always enjoyed a good joke, a good conversation, and the occasional Scotch whiskey. Cy is survived by his wife, Margaret; his sister, Gladys (Neil Shaben) of Edmonton; his son, Shawn Payne; his son, Charles (Chuck) Payne; daughter-in-law, Gloria Roth; his two grandchildren, Shawn and Rachel Payne; along with distant family both in Canada and in England. The Memorial Service will be held at SAAMIS MEMORIAL FUNERAL CHAPEL, 1 Dunmore Road SE, on Friday, October 30th, 2015 at 11:00 a.m. with Gary W. Goran officiating. A private interment will take place at Hillside Cemetery. In lieu of flowers, memorial gifts in Cy’s memory may be made to Alberta Heart and Stroke Foundation, 124, 430 – 6th Avenue SE, Medicine Hat, Alberta, T1A 2S8. Condolences may be sent through www.saamis.com or to condolences@saamis.com subject heading Cy Payne. Funeral arrangements are entrusted to