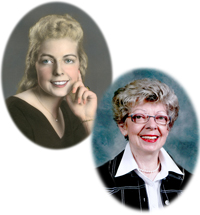 It is with heavy hearts that we, the family of Loraine Woolley (nee Leismeister) much beloved wife of Robert Woolley, announce her sudden passing at the Medicine Hat Regional Hospital on Saturday, October 24, 2015 at the age of 75 years with her husband and children by her side. Along with Robert, left to cherish Loraine’s memory are her daughters, Patty Jo Folliott and her stepson Trevor, with his family; Mischele (Leonard) Folk along with Loraine’s forever loved and treasured grandchildren: Brooklyn and Drake. Mom loved to visit with people from all walks of life. It was this love of people that led to her fulfilling and lengthy career in retail, beginning at the age of 16 at the Betty Shop attaining a management position, culminating with 25 years at the Card Shoppe at the Medicine Hat Mall. Loraine found such great joy in helping her customers. Not one to sit idle, she then spent the rest of her days volunteering with “The Post”, “The Red Cross Blood Donor’s Clinic” and the “Feed the Homeless” program. However, Mom’s greatest joys were her children and grandchildren. She spent countless hours at the arena playing the Music for the Medicine Hat Figure Skating Club making sure Patty Jo and Mischele were on top of things, and doing the Registration for their Summer Skating Schools. Loraine was so very proud of both of her daughter’s achievements. It was during this time that she met and made some significant life-long friendships: you know who you are. When her grandchildren came along, Loraine was proud and thrilled to attend every one of Brooklyn and Drake’s events including: T-Ball, soccer, music recitals, bowling practices and tournaments, volleyball, basketball, baseball and as recently attending her grandson, Drake’s McCoy Football game on the Friday evening prior to her passing. She loved Brooklyn and Drake to her very core and took great pleasure in spoiling them. Loraine was an amazing woman and though small, she was mighty! She will be missed more than words can say. Loraine is also survived by her sisters, Tillie Schafer, Kathleen (Clem Kuntz); brother, Frank (Evelyn) Leismeister and sister-in-law, Leona Leismeister as well as many nieces and nephews who affectionately referred to her as Auntie Raine. She was pre-deceased by her parents, Jack and Dorothy Leismeister; youngest brother, Jack and his wife Carol Leismeister; oldest brother, Basil; brother-in-law, Joseph Schafer and Ron Folliott. Vigil Prayers will be recited at Cook Southland Funeral Chapel, 901 – 13 Street S.W., Medicine Hat on Thursday, October 29, 2015, at 7:00 p.m. The Funeral Mass will be celebrated at Holy Family Parish, 1451 Strachan Road S.E., Medicine Hat on Friday, October 30, 2015, at 11:00 a.m. with Reverend Father Philip Le celebrant. Interment will follow at Hillside Cemetery. (Condolences may be expressed by visiting our website at www.cooksouthland.com). If friends so desire, memorial donations in Loraine’s name may be made directly to the Margery E. Yuill Cancer Centre, 666 – 5 Street S.W., Medicine Hat, Alberta, T1A 4H6. Honoured to serve the family is

One Condolence for “LORAINE ELIZABETH WOOLLEY”