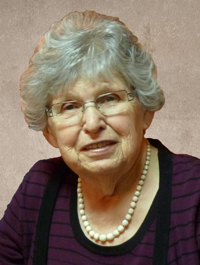 Marie Moore, beloved wife of Edward Moore of Medicine Hat, passed away peacefully on October 26th, 2015 in Medicine Hat at the age of 81 years.
Marie was predeceased by her parents, Mike and Katie Boras; her brothers, John Boras and Walter Boras; her brother-in-law, Andy Chontosh (Anne); and her nephew, Tom Chontosh.
Marie is survived by her husband, Edward; her son, Bernie (Gayle) Moore and family; her daughter, Brenda Moore; her sister, Anne Chontosh; her brother, Bing (Vicki) Boras; her sisters-in-law, Marie (John) Boras and Fran (Walter) Boras; and numerous nieces and nephews.
Marie was born in Raymond, Alberta, on April 20th, 1934. She was raised on the family farm in Iron Springs, and graduated from high school in Picture Butte. After graduation, Marie moved out into the world, living and working in Edmonton and Red Deer. In 1960, while in Red Deer, she met Ed who was stationed there with the Canadian Air Force. Ed and Marie wed on May 20th, 1961 and began the travelling life of a military family, living in St John’s, Halifax, Winnipeg, Germany, and Ottawa before finally returning to Red Deer in 1976. A few years after Ed retired from the Air Force in 1980, they made their final move to Medicine Hat.
Marie’s aptitude for math led her to work in various positions with the bank and in accounting at their various stops. While the family was stationed in Germany, working was not an option, and Marie found her creative side and took up painting, ceramics and, in particular, cake decorating. Numerous family and friends were recipients of beautiful and creative birthday and wedding cakes over the years.
In Medicine Hat, Marie made many long-lasting friendships through her involvement with the MS Society, her Sorority, and her church. In their retirement, Marie and Ed bought a motorhome and travelled to Arizona for several winters, reconnecting with old friends from their military days as well as making many new ones. One of Marie’s favourite things was to have her grandchildren come to visit and to take them camping in the motorhome, resulting in numerous happy memories for all involved.
Marie’s family would like to thank the staff at Riverview Care Centre for their excellent care and support to Marie and Ed for Marie’s last couple of years, as well as the family and friends who made the time to visit Marie and brighten her days.
Those wishing to pay their respects may do so at SAAMIS MEMORIAL FUNERAL CHAPEL, #1 Dunmore Road SE, on Tuesday from 6:00 to 9:00 p.m. and at HOLY FAMILY PARISH, 1451 Strachan Road SE, on Wednesday from 12:00 to 12:55 p.m. Vigil Rites (Prayers) will be said at SAAMIS MEMORIAL FUNERAL CHAPEL on Tuesday, November 3rd, 2015 at 7:00 p.m. The Funeral Mass will be celebrated at HOLY FAMILY PARISH on Wednesday, November 4th, 2015 at 1:00 p.m. with Father Albert Sayson, celebrant.
In lieu of flowers, memorial gifts in Marie’s memory may be made to the charity of one’s choice. Condolences may be sent through www.saamis.com or to condolences@saamis.com subject heading Marie Moore. Funeral arrangements are entrusted to