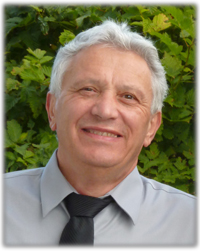 With his wife and daughter at his side, Steven William Nielsen of Medicine Hat, AB passed away quietly on November 8, 2015. He was 64 years old. He is survived by his wife, Connie and his children, Cheryl Fortin (Daniel), Kimber, Andrew and Laura, and his grandchildren: Amélie, Micah and Emma.

Steve was raised on the family farm in Standard. His soul ran wild and free, his body was chased by his parents (Bill and Gerda), his siblings (Joanne and Bob), and on occasion, a short-tempered turkey named Sam. He mixed gun powder in his dad’s ashtray, shot bullets at explosives and lived with a curiosity and a passion that gave him his signature smile – mischievous, charming and sincere.

In his twenties, Steve charmed his high school sweetheart, Connie, and convinced her to marry him. Soon enough, they had four kids and thus began his life of overdue library books, pancakes for supper and Sunday morning shoe shining. He kept busy renovating basements, tinkering in the garage and fixing all the things his children broke. When his children grew older and he ran out of things to fix, Steve volunteered to help renovate their homes – there was never a job too big or that couldn’t be fixed if you “just put a screw in it”, a trick he had learned in his 33 years working at Xerox.

In his retirement years, his dog Kyu became his confidant and travel buddy, and together they would prospect for gold in the Midwestern states, chase cattle in northern BC, and grab burgers at McDonalds. He spent summers at his sister’s ranch, building his largest project ever – a two story house – which stands to this day, and he spent spring & fall working at his brother-in-law’s farm, returning home on weekends exhausted and extremely happy. To make up for his time away, he took his wife to the Caribbean, Hawaii and Europe.

Steve also had a love for God and his church serving diligently in various roles. On any given day, you could find him counting tithes, participating in board meetings, clearing snow or running the sound booth. Indeed, he ran the sound booth so well, it would take years before anyone realized he started to lose his hearing.

He loved, and lost (predeceased by his parents, Aunt Rose, nephew, Mark and father-in-law, Ben), and was loved deeply in return by many friends and family. Steve strove to live with integrity and respect for others. In his final months, he specifically asked not to be remembered as great – so instead we will remember him as a loving, patient, gentle, humble man who faced his health issues without complaint and knew his future with Jesus was sure.

We will be celebrating Steve’s life at the CROSSROADS CHURCH, 1340 – 22 Street S.E., Medicine Hat on Saturday, November 14, 2015, at 1:00 p.m. Flowers may be arranged through Our Flower Shop or Cook Southland Funeral Home. Alternately, donations may be made to the Kiskatinaw Ecological Society, Box 908, Dawson Creek, BC V1G 4H9 – a cause dear to Steve and his family. (Condolences may be expressed by visiting our website at www.cooksouthland.com) Honoured to serve the family is